I have always believed that as a professional photographer I should always continue to pursue personal projects. Projects which have nothing to do with imagery I create commercially. I find that it helps expand my view of the world, beyond that which is just ‘pretty’ or pleasant to view. Gorgeous people in beautiful outfits are easy to shoot. I also believe that in our world of immediate gratification I needed to maintain projects which take time to develop and those which require collaboration. 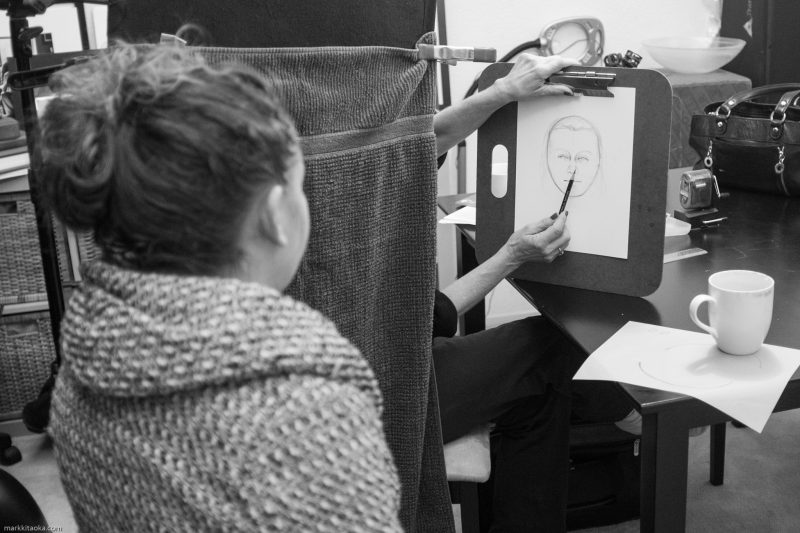 The subject views Naomi’s sketch of herself as she describes herself to Naomi.

In October 2015 I began a project titled “Our Perceptions, Ourselves.” A pictorial study about how each of us views our own appearance in contrast to how we are viewed by others. My thought was to try to find a forensic sketch artist who could draw a specific person and then have several different people describe that same person to the artist. I would then paint the actual subject’s face white and project each sketch onto their face and photograph them with each sketch. I thought it would be both unique and interesting by adding a third dimension to a 2D image even though I was converting it back to a 2D image. In addition it invests the subject in the drawn perceptions of how others view them. My plan is to have at least 12 individuals with three separate sketches, varying by age/race/gender. 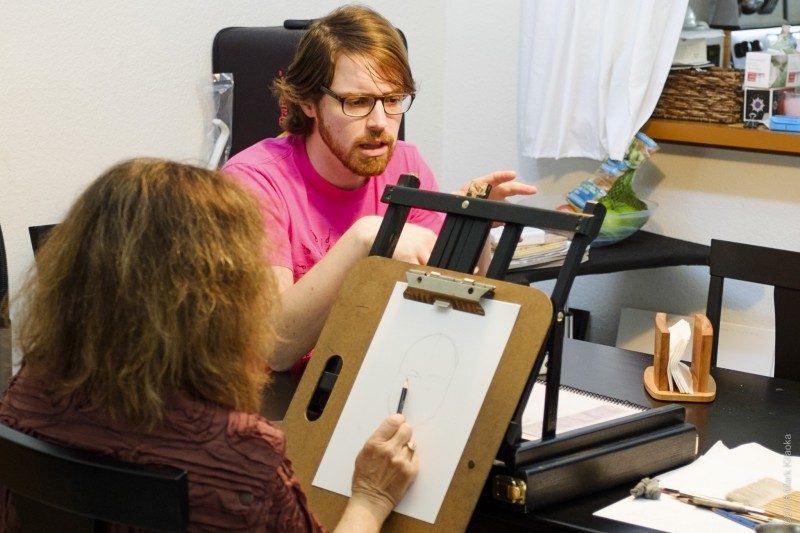 The subject’s current boyfriend describes her to Naomi. 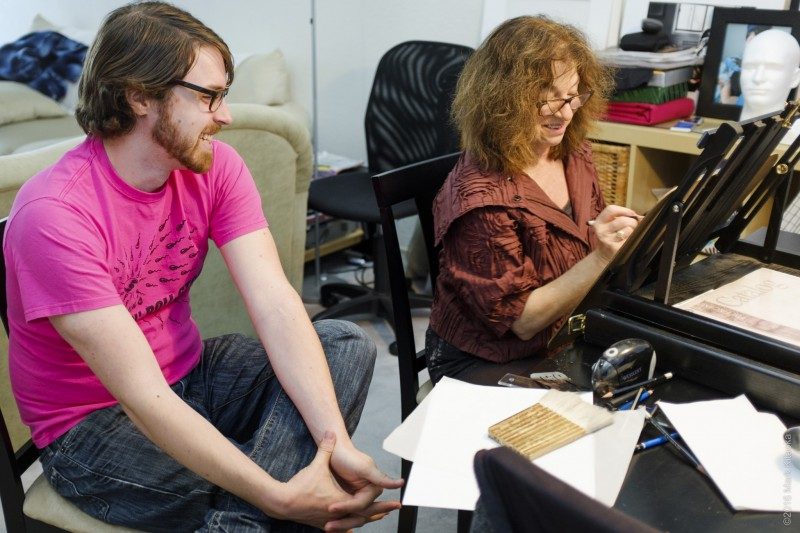 After coming up with this idea my partner Tracy said “Oh Mark, that’s been done by Dove Soap!” Huh? After coming up with what I thought was a unique and clever idea I found the Dove video online and watched it. But after watching it my thought was “Well, that’s fine I guess my idea is not unique and has been done before, but I’m not trying to sell or promote a product. So fuck it, I’m gonna do it anyway because my intent is different! I’m not trying to sell something.” 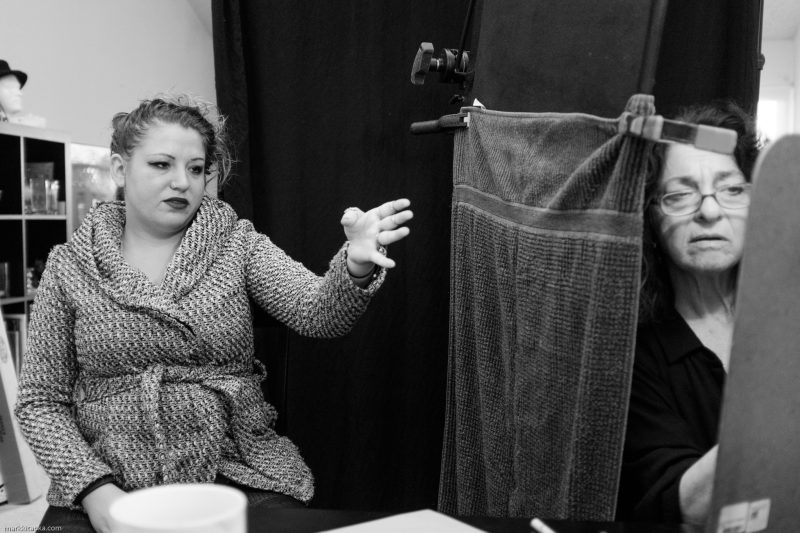 The subject asks Naomi to make adjustments to her sketch. Again Naomi never gets to see the subject before their project is complete. 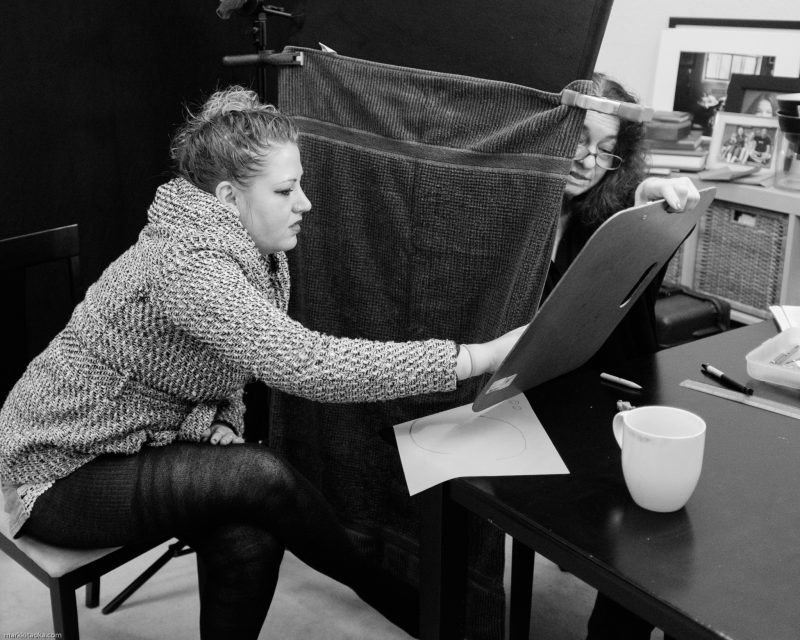 And just like any idea (ideas are like buttholes, we all have them) the details and planning involved to make it more than just a thought is the tough part. Where the hell was I going to find a real forensic artist? And if I even find one, will we get along? Will they think the idea is rubbish? Does their day job trying to identify bad people jade them from doing something artistic? So I searched on LinkedIn for any forensic artists in the Bay Area. There were two and I wrote to them about my idea. Not a single response.

So one day when I was visiting a Peninsula Museum I simply asked the head curator Ruth if she happened to know any forensic artists. (She is accustomed to me asking weird questions) And to my delight she said “Well yes Mark I do, her name is Naomi and I think you two would get along famously! Here’s her contact information.”

So I went home and immediately wrote to Naomi. Much to my delight she wrote back right away and we arranged to have some coffee. Low and behold it was as if faith put us together because we connected almost immediately like kindred spirits! Now we were off to the races!

Here are the parameters of the project:

What we found was fascinating. So much more was revealed than just how we view ourselves differently than how others view us. The differences between how women and men view themselves, how race plays a part in our perceptions, how narcissism influences how others view us as well as how we view others, the role age plays in how we describe others. We found that the conversations and biases are so interesting we plan to publish a book which will include the images. As a matter of fact we have begun recording the sessions, they are that fascinating.

Preparing the subject’s face to have each sketch projected onto her to be photographed. 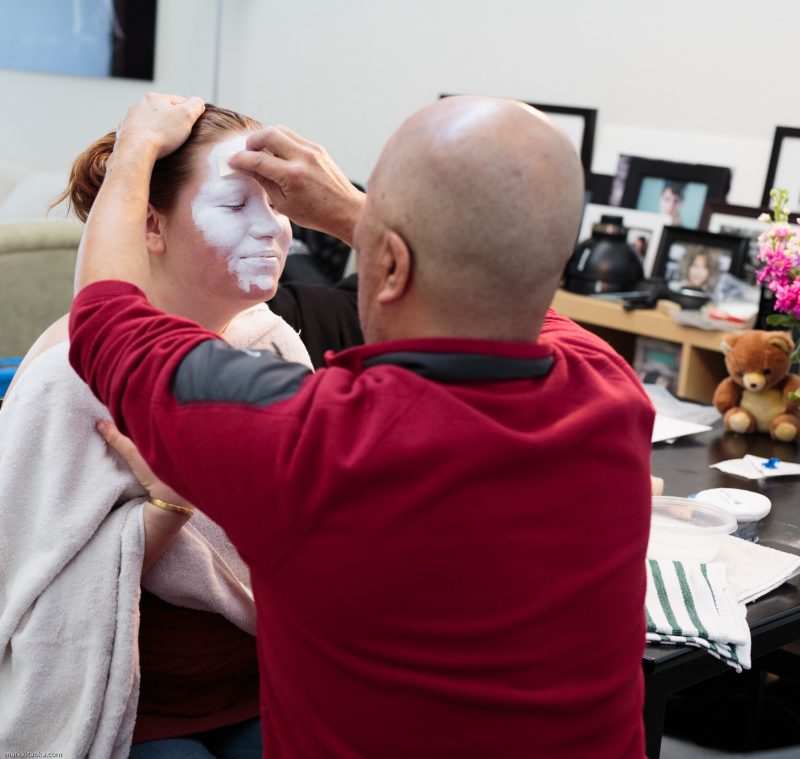 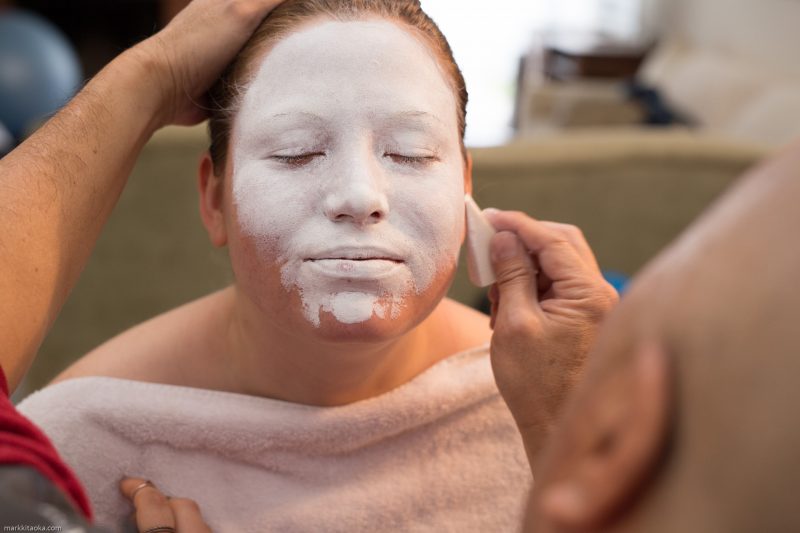 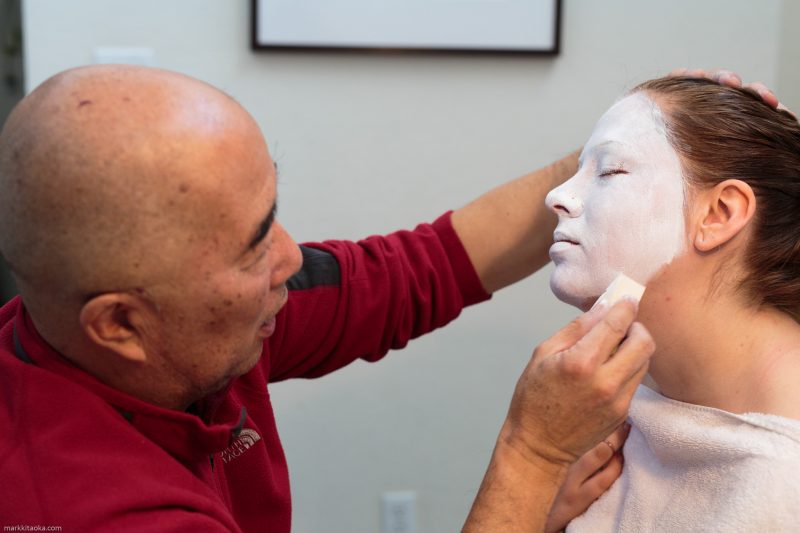 And before the book is published I will say that women tend to describe themselves in pieces, men in totality. Men are more ‘forgiving’ of their appearance than most women. Race definitely comes into play during describing ourselves as well as other, but only if the person is non white. It’s all SO INTERESTING and I could not have even brought this to fruition without the help of Naomi and Tracy. And if I didn’t have the help of makeup genius Mary Jones I would have never known how to apply makeup! When she told me to use Kryolan white I asked “Oh like the kind of paint I can get at Orchard Supply Hardware? The kind in a spray can or the kind you use with a brush?” I won’t even try to describe her reaction and facial expression….

This project will continue for as long as necessary.

The sketches projected onto the subject’s face and then photographed. 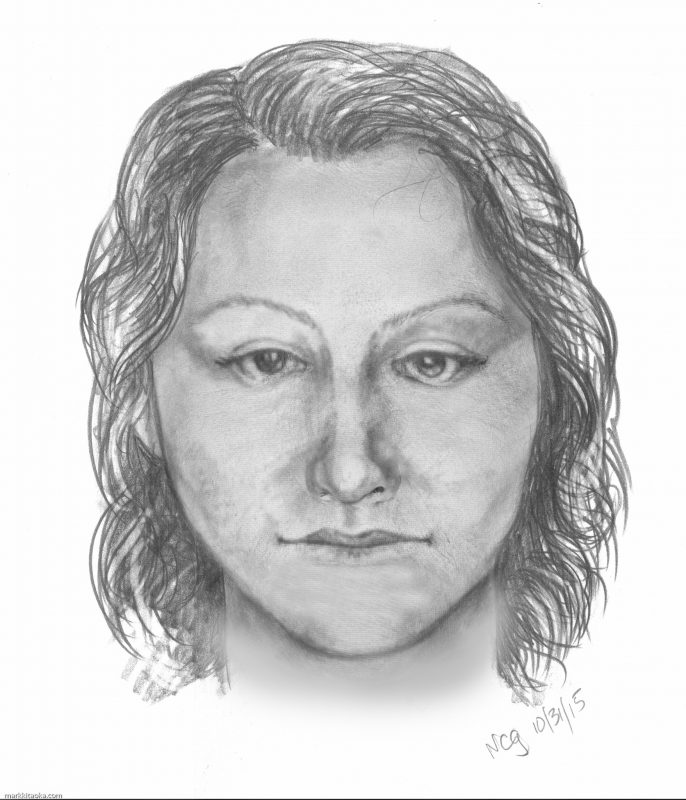 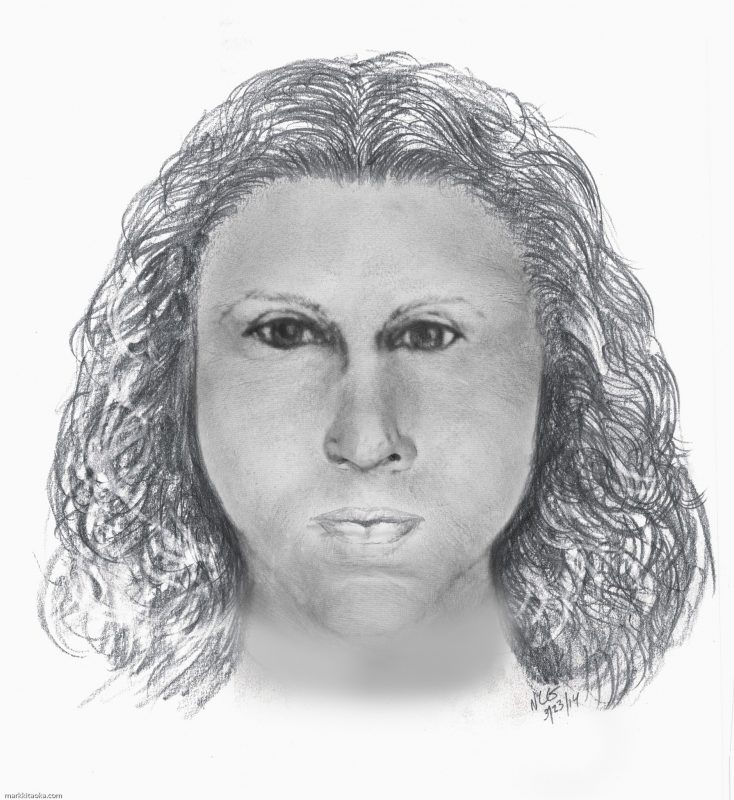 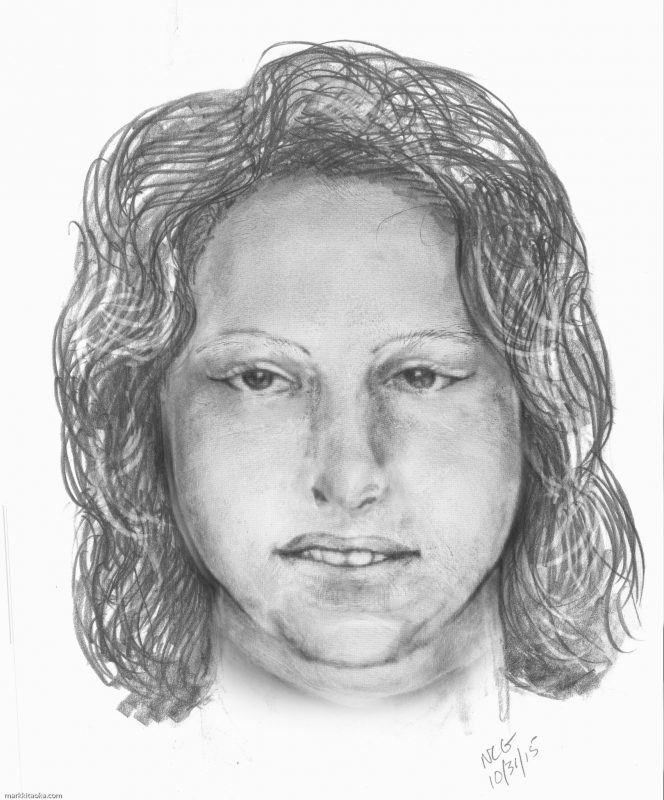 Forensic art How we view ourselves Our Perceptions Our perceptions ourselves