Almost everything one reads, hears or views in today’s world is filled with fear and dread. The American economy is in a state not seen in many decades. Our new President is faced with a daunting tasks amid thousands of workers losing the very jobs they depend upon to feed themselves and their families. Financial institutions are looking toward the Feds for the equivalent of corporate welfare.

But amid the gloom of today’s times, I can say with much enthusiasm that if we all look beyond our own troubles, we can find elements of life that are truly joyful and important. Recently I asked a local San Francisco community center if I could volunteer to run a four week after school photography program. This is my second week of the project and it is truly the highlight of my week. The enthusiasm of the children is absolutely infectious in a way that is difficult to describe. Since my own children are grown, I sorely miss those moments of utter innocent joy and fascination with new discoveries. The task of the children was to take home the disposable cameras I purchased for them and record a story of their families. As I looked upon their photos today after picking them up from the lab, their images tell individual stories about their own lives. Next week I return to have them assemble their images on individual boards and the following week they will present their stories to the rest of the class. The Director of the center has decided to hold an art showing specifically for the kids to display their work. Friends and families will be welcome to attend.

In a seemingly unrelated event, I was hired to shoot a publicity session for a theatre group on the very same night as my weekly session with the kids at the neighborhood center. The venue where the session was to take place was at a local dance studio. When I arrived, there were some kids and their instructor in the venue, so I had to ask them to move to another room so that I could set up the lighting equipment. As we were setting up the shoot, I could hear the kids asking their coach what was going on. So I approached the coach and told him that it would be fine if the kids wanted to come in to see what was going on. Once inside, I asked them if they would like to be photographed, since the actors were still in the process of dressing and preparing their makeup. In what can only be described as a dull roar, the kids all yelled, YES! Since I was shooting against an infinity background, I told them that they could jump, run or do whatever they wanted for their “studio shot.” The image you see here is just one of the gems I was able to capture that day. 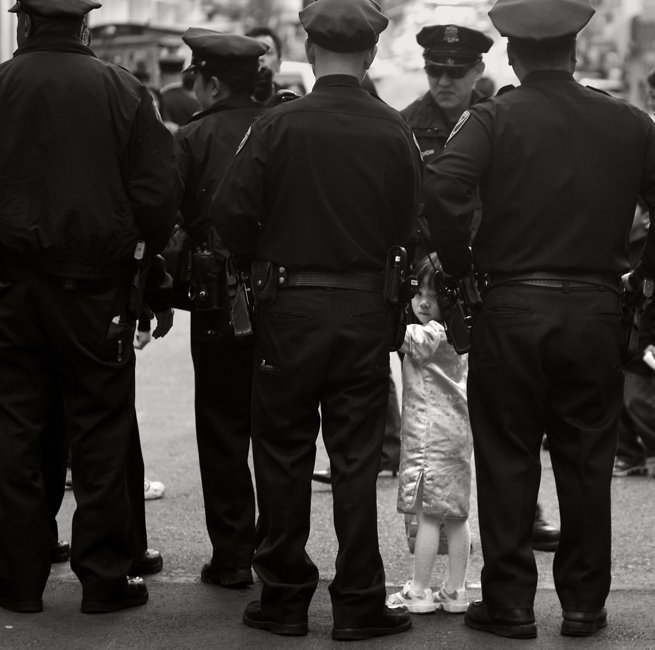 And just the very weekend before, we were shooting the annual Chinese New Year Parade in San Francisco. Rated as one of the ten best parades in the world, this is my fourth year covering the night time parade. During preparations, I noticed a young girl amid the San Francisco Police contingent and was able to grab a shot of her as she stood among all the officers. As I often do, I gave my card to her father and mentioned that if he wrote to me, I would send him the photograph. This is something I often do, but seldom receive a response when I offer people their photographs. As it turns out, the father wrote to me and I in turn sent him the photo both in electronic and print form. And in a very kind gesture, he asked if he could send me something in return, a San Francisco PD sweatshirt and most important, an offer of friendship.

About three weeks ago a young woman wrote to me asking for some advice about how to shoot stage photography. She is married to one of the musicians with a dance troupe that is touring San Francisco for six weeks. I offered to meet her at the theatre so we could meet and discuss the nuances of live performance shooting. Tracy and I immediately knew her to be a kind soul, so we invited her to our home to share a meal and begin a friendship. And in two nights we join both she and her husband to share another meal.

So how is this all connected and where am I going with this story? During the beginning of my photographic journey it was important for me to improve and to be recognized for my work. I dreamt of being in a gallery exhibit and having my work ‘shown’ somewhere. I participated in juried blogs and was pleased as my work seemed to garner more accolades. But something happened along the way. My goals changed and with those change in goals what was important for my work changed along with it. For me being recognized is no longer the focus. Improvement will however be a lifetime pursuit. But improvement is no longer singularly photographic. My subjects are what matter to me. If I can help a performing artist realize their craft or have the ability to show their families a side of themselves they have not seen. Or if I can help a child discover their own voice through art, those are moments of optimism that no amount of money can ever buy.

For me optimism comes when my own intent is pure. The rewards are tenfold yet have nothing to do with photographic recognition.