“Too High Daddy!” Our Daughters – Part 1

Many of my younger friends are having children and quite a few of them are having daughters. I wanted to write my thoughts about raising my own daughter and offer my feelings about raising a little girl to become a strong woman. 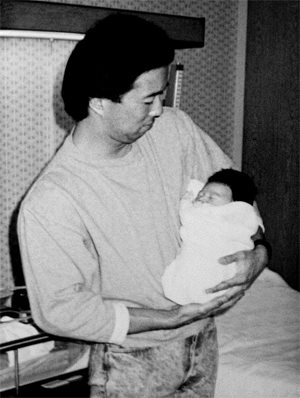 The very day my daughter was born. And yes she was born with all of that hair!

My first child, a boy was stillborn. Late in the pregnancy a small tear in the amniotic sack proved fatal. Examining the ultrasound broke my heart. He had wedged himself into the part of the sack which contained the remaining fluid to survive. The pediatrician told us that there was a 50/50 chance of his survival, but as the final weeks approached it was apparent that he had died. We were devastated. My wife delivered our son and since we had not gone through any birthing classes I had no knowledge of what to expect. It was horrible. Once our son was delivered, he was placed in a stainless steel bowl covered with a towel. The doctor asked me if I wanted to see our son. As he lifted the towel to reveal a full formed infant, I broke down sobbing and tried to comfort both of us. Yet in the moment some things in life cannot be comforted. Only the mercy of time has that ability. Once I got home I threw out all of our stainless steel bowls and to this day I cannot bear the site of one.

We had both agreed to name our first child after my late father. We named him Nori.

That single event was the second in a series of horrible events which changed me forever….for the better.

Prior to my stillborn son I had been completely focused on climbing the corporate ladder. I amassed successive promotions along with pay commensurate with my new titles. Life was my oyster and my wife and I were the typical Yuppies of the 1980’s. Upwardly mobile with tons of disposable income. Nice cars, designer clothing, a new Bay Area home – the whole ball of the Young Upwardly Mobile wax.

And in an instant none of that was important. As a matter of fact it seemed obscene that material items, vacations and promotions were the most important part of our lives.  For two solid weeks we sequestered ourselves from the outside world. We didn’t take calls, answer the door or speak to anyone, even our own families. For the most part we simply cried. I recall that the most kind actions one of our friends did was leave a completely cooked meal on our doorstep, rang the doorbell and left.

As we began to heal we wondered if we would ever try again to have a child. Two years later my wife became pregnant. Because of her first birth, sonograms were performed every two weeks and because of that we knew the gender of our child, a little girl. When we first learned of our daughter’s gender, my wife cried and uttered, “We will never have another boy, I’m so sorry!” To this day that statement breaks my heart. (Our third child was a healthy boy, but that’s for another Musing.) We named her Nori.

Being a brand new dad is quite the experience. Sure everyone offered me advice and told me about the dreaded ‘first three months’ where parents get NO SLEEP and it’s almost a vacation to go back to work. But just like all egocentric men I thought to myself “I’m gonna be different.” Hahahahaha! No sleep, no sleep, no effing sleep. I remember thinking that I was quite a stud being able to party without sleep for two or three consecutive days. Hell that’s sissy stuff compared to having a newborn who only sleeps three hours at a time because she was diagnosed with Colic! She liked movement, she loved vertical movement so walking and bouncing were what soothed her nighttime antics. This combined with singing, it didn’t matter what I sang to her, she just seemed to like the sound of Daddy’s voice. (no wonder her taste in music sucks now…) 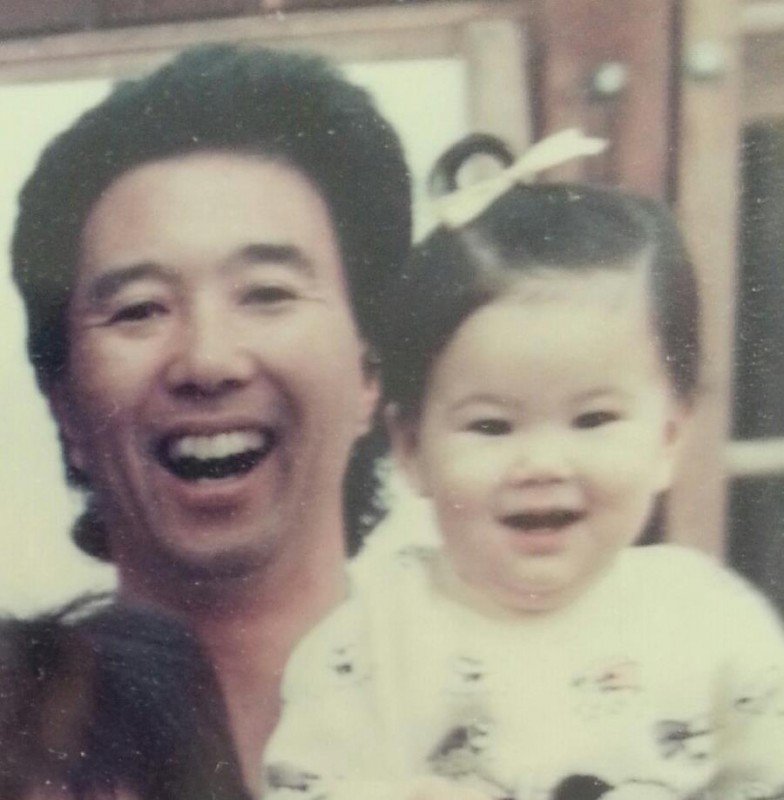 As she grew from infant to toddler I read to her most nights before she went to sleep. I recall it being one of the most intimate times during the day. Snuggled up against me and we both reveled in that time. Some nights I was dogged tired from work and actually skipped pages to hurry along my reading. Her little hand would gently reach up and grasp the page, turning it back to where I ‘should’ have been and in her little voice she’d say “Daddy , you skipped a page.” as she continued to suck her thumb.

Each day I would come home from work to hear her yell out “Mommy! Daddy’s home!” I would change my clothes (I wore suits every fucking day back then) and we would go to the playground in our complex. It was the same routine each day before dinner, first the slide, then the rope ladder and finally the swings. “Push me higher Daddy, HIGHER!” Until finally she would shriek out “TOO HIGH DADDY TOO HIGH!” We’d go back home and each day she would report to her mother “Daddy pushed me too high AGAIN Mommy!”

So why recount these seemingly inane routines? Because she loved them, because those routines with my daughter is part of who we were as a father/daughter team. She still remembers that routine and looks upon them fondly. Something daughters can count on, day in and day out they share only their fathers is damn important. In my mind it shows them we care enough for them to share part of their day with us each and every day. Even if it’s too high!

But wait, there’s more….she’s growing into a young girl.

I had little money once Nori was born. I had quit my corporate job and started my first of three self employed periods in my life. Having a motorcycle at that point in my life, (which I’ve had all of my life) was out of the question. So I bought myself a bicycle to ‘replace’ my two wheeled hobby. (BTW it’s a shitty substitute) So I taught her to ride a bike and actually waited too long to remove her training wheels. She begged me to remove them and my heart swelled as I was running behind her holding onto her seat as she yelled “Let go Daddy, let go!” and she rode off down the street weaving back and forth but not stopping.

So as she got better, I had her ride with me on the path near our home. Then one day I had her follow me off road, through some mud…and that’s when the trouble began. She got bogged down in the thick mud and ended up falling to the side. She was literally COVERED in mud along with her pink and white bike. It’s the first time I could tell my daughter was PISSED at Daddy. She got back up, pushed her bike onto the path and started riding back home….not a word spoken to me. I knew I was in deep shit.

On the way back I noticed a guy washing his car. I stopped and asked if I could use his hose just for a minute and explained what had just happened. He looked at Nori’s face and said “Sure man, whatever you need, she looks pissed!” So I hosed off all the mud I could and said “OK Sweetpea, see it’s all better!” Still not a word. We rode home and she immediately went into the house and spoke privately to her mom. Her mom came out and said “Oh man, you’ve really pissed her off, you better say something.” So of course I apologized and she let me have it. Did I say anything after her tongue lashing? Oh hell no!

My point here is I believe as Dads we need to let our daughters express anger, REAL anger toward us as fathers. It sets the tone for how they will react to having hurt feelings or anger in the future with men. It was from this point forward that she never hesitated to be angry with me when I deserved it. Most important though is she is now able to tell men she is angry and why. She’s NOT one of those women who responds with “Nothing” when asked what’s wrong. I don’t know about you, but I hate that shit.

I really struggled with the whole “pretty” thing when Nori was small. Being her father of course I thought my daughter was the prettiest girl on the planet. But I didn’t want her to grow up believing that something she didn’t earn, but was simply born with, the “pretty privilege” would not be her first ‘go to’ unconscious or consciously played card. I’ve met numerous women in my lifetime where I’ve thought to myself “Wow you’re much prettier when you don’t talk.” and I didn’t want my own daughter to be one of those. I’ve spoken to some women about the concept of the pretty privilege and most bristle. But when I ask “So before you’re born you have a choice to be very pretty or homely” it takes on a different response. ‘Nuff said….

So I’d say to her, “Nori, you look very pretty today, but what’s more important is for you to be strong. Pretty isn’t something you earned, it’s something you got.” Was that the right thing to instill? I’m not sure, but I can say that she is just as pretty when she talks…except when I’ve pissed her off. 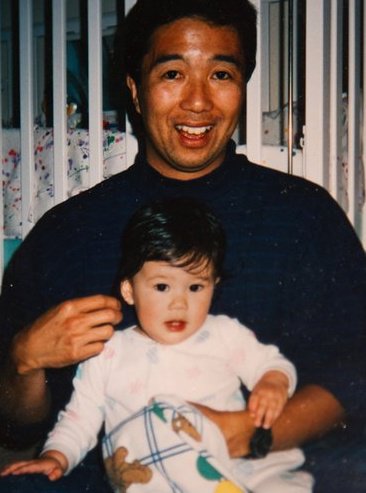 At this point I’m still not stupid…but it won’t take too long….

For some unknown reason whenever she wanted to talk to me about something ‘serious’ she would like to do so while I’m driving. I recall with much dread when I was going to run an errand she would yell out “Daddy I’m going to go with you!” My wife would give me ‘the look’ because she knew what I had in store for me. It got to the point that I would try to quietly pick my car keys out of the ceramic bowl I kept them in so she would not hear me! With hearing like an bat that never worked even when I switched the ceramic bowl for a woven knit bowl. What would we talk about? Mean kids at school, what I do at work, if there was ever going to be other brothers or sisters, why I shave my face but mommy does not (Mommy waxes her mustache) things like that. Things that are important to a two year old.

As I look back on those days I should not have dreaded them. It established a private dad/daughter time without others. She felt she could ask me questions in the privacy of our little safe world of the car. Today at 27 it’s not easy to get her to talk to me about her adult issues, but I believe had we not had those special car conversations it would be much more difficult to talk about today’s real adult issues.

I’m not quite certain at what age I’ll stop this little series. Because as a father you should know we get exponentially more ‘stupid’ as daughters transition from 10-22ish. And be forewarned that my little saying “You can’t have more than one working vaginas in a house” pertains to the Mom/Daughter drama in the post puberty era. We get to be ‘unlucky Pierre’ in that time zone. Siding with one means you’re in the shit house with the other.

Up Next: Talking about Sex at 8 years old and facing fear