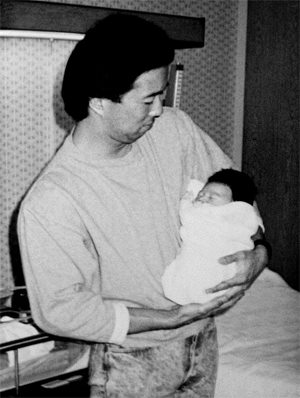 Every parent hopes that their own children grow up to beome better people than themselves. It’s universal. I know the reason my own father pushed me so hard was in an attempt to assure that universal truth. My dad passed away suddenly when I was 21 from cancer of the stomach. He was 51 and I have now lived eight years longer than him.

When my eldest turned 21 I had a bit of a panic attack. I had my own experiences to draw upon to emulate ‘how to be a dad’ but since dad died when I was 21 I felt that I no longer had a road map for my own children. I knew what dad did, lessons he tried to instill in me, but now that my own child was 21 what advice would I try to convey? How should I act? With no firsthand experience I was unsure of my role to an adult child.

When she went to college she followed my advice and didn’t declare a major right away. How can anyone at 18 really know what they want to do for the rest of their lives? I had studied psychology in college and was literally shocked when she announced in the beginning of her junior year that she wanted to major in psychology and minor in Spanish. Her question to me at that point; “Dad, why didn’t you go on to graduate school for psychology?” My answer, “Because I decided I didn’t want to listen to other people’s problems for the rest of my life.” Her blunt response, “Oh so you WASTED four years of college!”

Although I had small glimpses of her adult personality before that moment, it was at that very instant I recall thinking that although I had named her after my father I never thought she would embody his unabashed directness and personality! Then I recalled that as a young child whenever her mother or I would buy her clothing the very first thing she did was look at the maker’s label. If it was NOT from Target, she would immediately say “I don’t like this!” Granted most of her everyday clothing was purchased from Target, but for birthdays or special occasions, we’d venture to Macy’s or Nordstrom to buy something special. Nope, that was not acceptable. I then recalled my own father’s constant words to me – “Save your damn money. Don’t spend it on silly things!”

Reinforcing what appeared to be my father’s frugality my own mother asked me if my daughter ever got “The Christmas check I sent to her.” When I checked with my daughter she said, “Oh I did get it, but I threw it away.” Huh? was my response. “Yeah, I felt it was too much money and I want to earn stuff on my own.”

After graduating from college in yes four years, she told me that she would like to immediately go onto graduate school for psychology. I simply said “Nope, you’re going to try to get a job in that field and find out if you like what you’ve studied. I have many friends who went to school to become doctors, lawyers or engineers and hate what they do for a living. Work for a while in your field of study and if you find you like it, we will work out the expense of graduate school.”

So off she went looking for work in her field in the year I refer to as The Great American Recession of 2010. No luck, but undaunted she found an entry level position in Southern California working with autistic children. I would listen to the heartbreaking stories she would tell me about the amount of effort it took to yield what I viewed as little reward. A five year old child who had never spoken, yet was able to one day answer the same question his mother’s presented every day, “Do you want cereal for breakfast?” with a “Yes” because of my daughter’s efforts.

When I asked her how she managed to have that amount of patience and fortitude with such little results her response, “Oh my gosh Dad, YOU are my father how could you think I would not have that amount of patience?! I put up with you!” Gulp… guilty as charged. Both of my kids have always had this saying, “My Dad is only about ten seconds away from telling you to fuck off if he thinks you’re full of shit. Half that time if you piss him off.” Not to worry, it never applied to them…well almost never!

So after about a year and a half of working in SoCal, she called to tell me, “Dad I hate Southern California, I want to move back to the Bay Area.” My question, “Do you have a job up here?” “No” was her response. Since I knew that she probably had the first dime she earned babysitting I figured it was OK and if she ran out of money I could help her out. So move number four was in order as I flew down to SoCal to drive her stuff up to Sacramento where she and her roommate moved.

In very little time she secured a job working with the homeless. Her duties included helping her ‘clients’ transition back into society through a halfway house. Her pay bordered on poverty level, but that didn’t dissuade her from continuing to work in her field as well as contributing to what I call “socially redeeming” work. One day I get a text from her which read, “Dad imagine your temper in a female body…THANKS A LOT!!” When I called to find out just what was wrong, even though it was her speaking I heard both myself and my father complaining about the ineptitude of co workers, complacency and not following through.

Then it happened. About a year and a half after moving to Sacramento she got her first “Big Girl Job” interview. Full benefits, vacation time, 401k the whole thing including a 61% pay increase. The down side – she didn’t really want the job after talking with the buyer. So she called and asked me what to do. My advice, “Call her back and respectfully ask her the truly tough questions you want to ask. Since I’ve been ‘a suit’ most of my adult life I can tell you that if she’s worth her salt she will respect your candid and tough questions. If she’s crummy she will take offense. If that’s the case, trust me, you don’t want to work for someone like her. Besides what do you have to lose, you don’t want the job anyway!”

So she called, asked the tough questions and guess what? She decided she wanted the job after all! After asking me some more questions I simply said “I know money is not important to you, but remember your largest pay increases come when you switch jobs. Ask for what YOU want because you’ll never get as large an increase as when you negotiate your beginning salary.”

She took the job and the other day we had lunch together. I wanted to know exactly what the new job entails. She works with the mentally handicapped to help keep them out of large institutions. She places them in small homes, much like board and care for the elderly where, depending on their level of functionality, are able to live their lives as close to ‘normal’ as possible. Most will remain in those homes for the rest of their lives simply because their own families don’t have the skills or means to support them 24/7 or they don’t have families.

I asked her if she still loves what she does and with a wonderful smile and a gleam in her eye she simply said “Yes I do.” (I no longer ask where she gets her patience, I learned my lesson!) We talked about graduate school and in her sage manner she simply said, “Dad I don’t want to just get an MA anymore. I want to go all the way and get my PhD. I feel I can really make a difference going that route.”

I’m not going to take any credit for both of my children being better than me. Because they are both so selfless in how they live their lives I can only surmise that they were born that way and their mom and I simply held their hands so they could grow. Am I proud? Oh hell yes! Do I have to fear not knowing what to do with kids over the age of 21? Nope, simply because they already know what to do. I’m simply here as a sounding board and constant cheerleader. Do they make me a better man? Absolutely. I find that I have to live up to the higher standards they have set and for that I am eternally grateful.