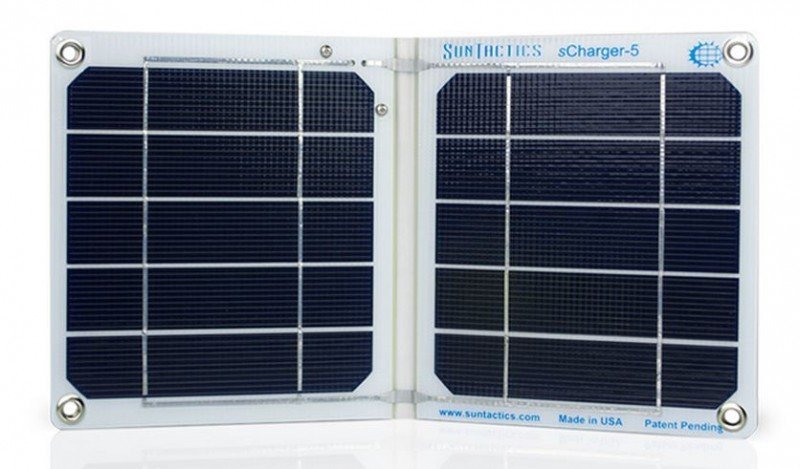 Why would a solar charger review be on a photographer’s website blog? Well.. in addition to having a passion for photography I am passionate about the great outdoors as well as being prepared for most emergencies. You can chalk it up to Boy Scout training, surviving the 1989 Loma Prieta earthquake, camping in the Mohave desert with my Dad who taught me to survive by knowing where to find water, which plants to eat, how to kill and cook a rattlesnake, or my pseudo survivalist mentality. In the summer of 2012 Tracy and I were going on a long camping trip. As we were preparing, we ventured into our local Costco and one of their roaming vendors had a table set up selling portable solar panels that had an included rechargeable battery. I’m a REAL sucker for those manned booths where the salesperson talks about the product. It’s one of the reasons I don’t watch late night infomercials…..

Anyway for once I decided to do some research before buying from a booth vendor, so I went home empty handed. But as I started to research portable solar panels my eyes began to roll over in my head about Watts, Amps, Milliamps, rechargeable battery packs and such. Ugh… So instead I went to backpacking sites and some doomsday/survivalist’s sites to see what ‘they’ liked. And guess what? Most of them poopoo’d  the nylon units I saw at Costco and instead highly recommended panels by Suntactics. And some of the troops in Iraq/Afghanistan highly recommended them as well. So it was on to Amazon to buy what was their only unit at the time, the S5. It was a bit more expensive than other brands, but one of the things I appreciated is that it’s made in the USA. I took it with us and it worked flawlessly. I charged my  iPad 2, Tracy’s iPhone 4 and my Samsung Galaxy 3. Now I don’t go camping to stay connected, but using the GPS feature to navigate is quite the luxury. Even in cloudy weather the S5 produced enough charge to trickle charge any of the aforementioned units. Oh and in the desert, it’s amazing! 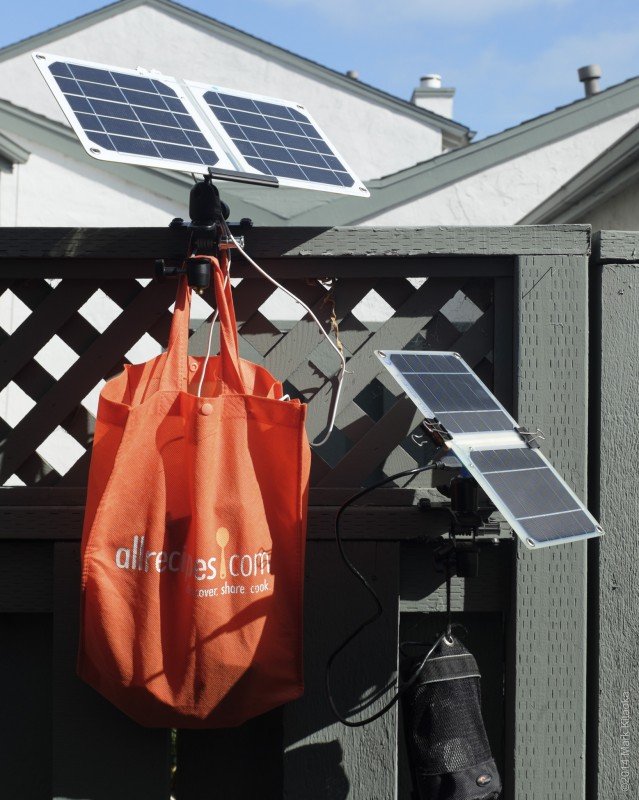 Testing my new S8 alongside my trusty S5. Attached to the S8 is my iPad2 and 2 AAA batteries. The smaller S5 is charging Suntactic’s new 6000mA USB battery

One of the features I really like about the unit is its size and rigidity. In the real world having two rigid panels hinged with thick silicon is fantastic. Being able to stand the unit up on end like a book makes life much easier. I did make my own bracket to hold the S5 on a small tripod or clamp. When I am at a picnic table it’s very easy to clamp the unit to the table top and angle it toward the sun. I use a Manfrotto 175F Justin Spring Clamp with Flash Shoe for those occasions. (Hey I’m a photographer, so I have lots of these) 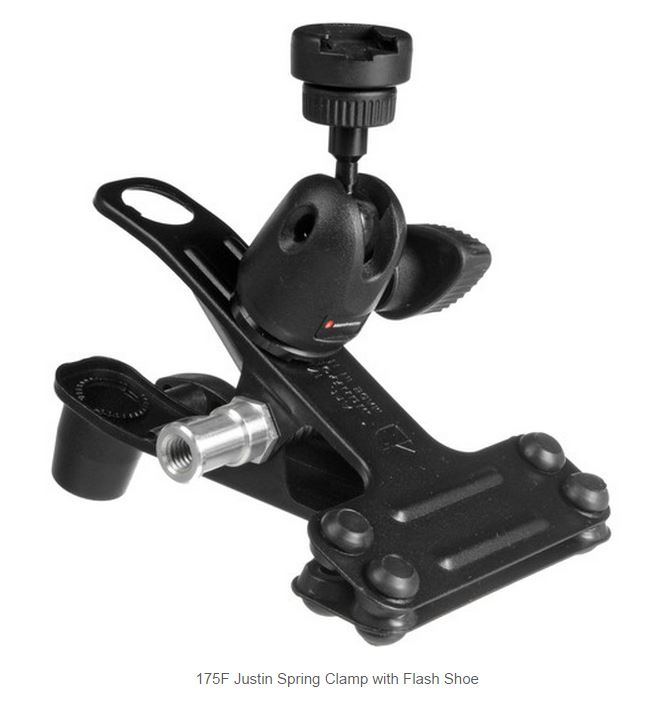 When I’m backpacking I prefer to us a small Pedco Ultrapod II. I find it much better than a Gorillapod  since it’s more stable and seems to be more secure when I have to wrap it around a branch or post. Since my purchase in 2012 the fellas at Suntactics have developed their own version of a little holder. I’m using one now and it’s pretty slick. 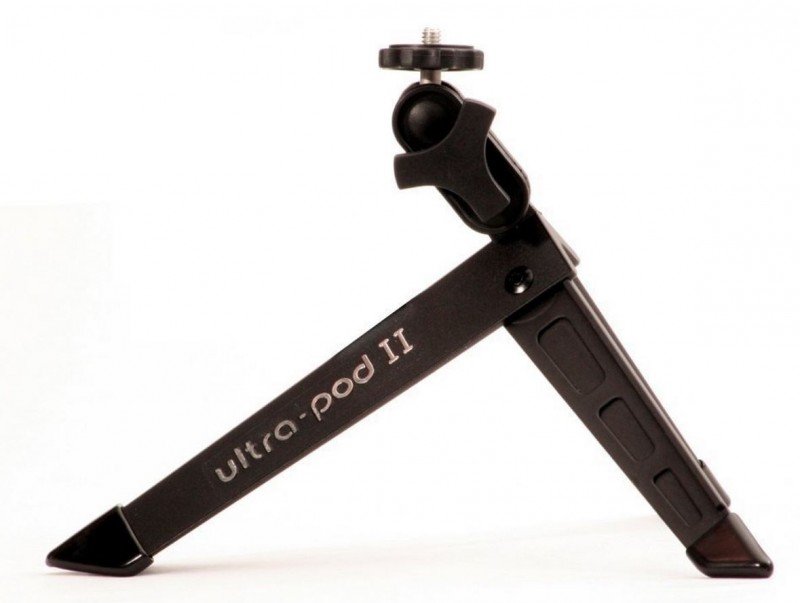 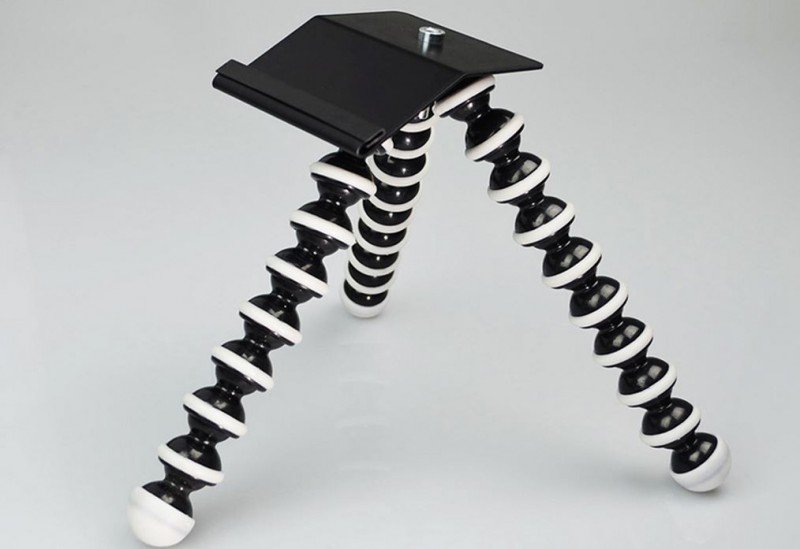 I’m not going to go over all the tech specs of his units, how many amps, how many devices, how many this and that…  (in photography circles we call those ‘types’ pixel peepers and I’m not one of those) ALL of those questions can be answered by simply going to their website HERE. I will only say this, I can vouch for the charge times they claim. In some cases it’s actually shorter to charge something than what’s specified on their site. And the durability of their units are beyond reproach. 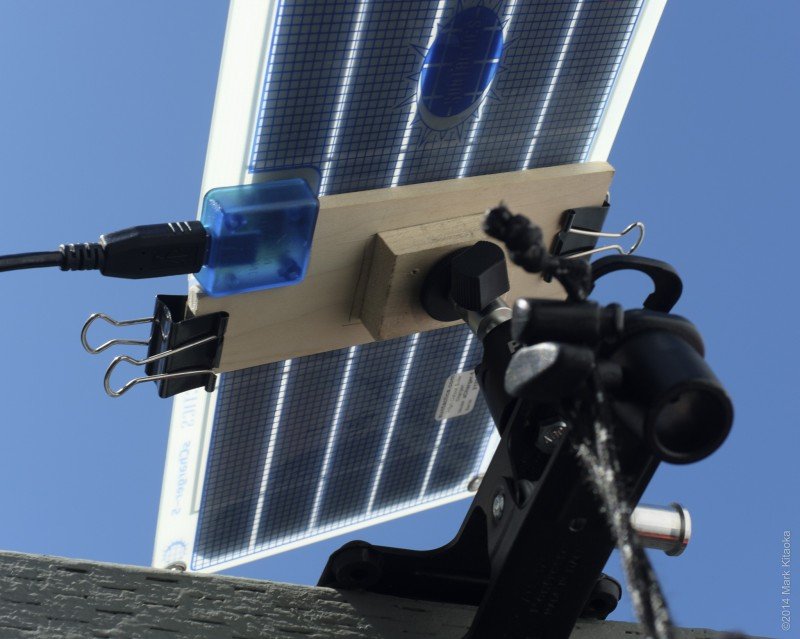 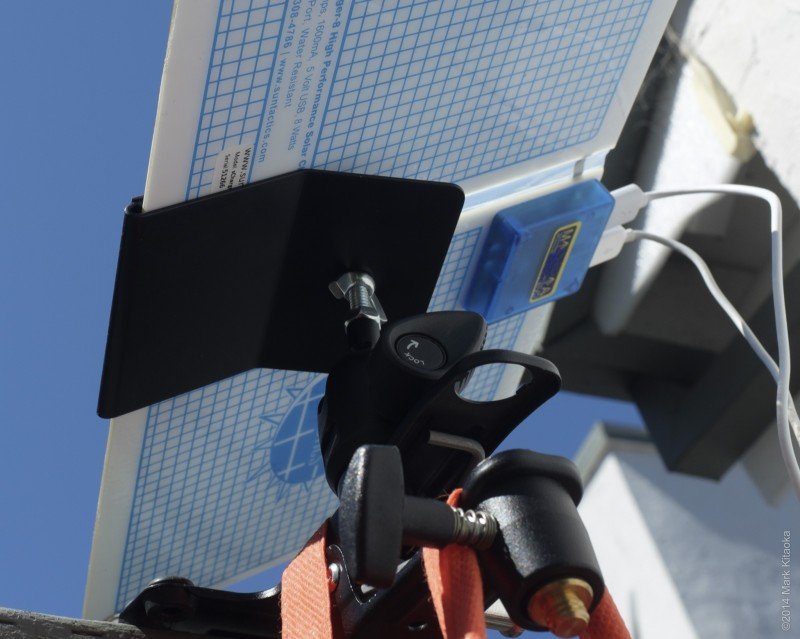 Suntactic’s panel holder which I’ve placed onto a Bogan clamp.

Not a camper? Do you consider ‘roughing it’ meaning the hotel doesn’t have 24 hour room service or a manicure facility? Well have you ever been in an extended power outage? Earthquake? Flood? Forgot your wife’s birthday? Ever wanted to completely disappear off the grid before your kids turn into teenagers? Portable solar panels and rechargeable power packs have so many uses outside of camping. I always laugh when I see people at airports sitting against a wall next to an outlet. It’s one of the reasons I’d searched for a good portable battery to recharge my USB devices.

Anyway there’s another reason I now love Suntactic products more than ever. I have been searching for just the right rechargeable battery to carry with me on trips. I travel constantly and sometimes I need more power than my Samsung or iPad2 battery allows. So while searching  for a light portable battery pack one night I happened upon Suntactic’s site and found they had developed new solar panels. I noticed that they had placed grommet holes in each of the four corners of their units. I have lashed my S5 to my backpack, but having holes would have made it much easier.

I contemplated drilling my own in their early version, but wanted to check to see if I would damage anything. So at around 1:30 AM (yes my best thoughts are in the wee hours of the evening) I noticed that their ‘Chat’ function was live. So I wrote and low and behold I got an immediate response! The ‘agent’ (ended up being the owner/founder, Dean) on the other end told me to send my unit in and they would drill and grommet my older unit at no charge. Well when I determined that they are a local Bay Area company and I love meeting people who produce a great product I simply got into my car the next day and drove down. One of Dean’s partners greeted me and when he looked at my S5 he simply said “Wow that’s an old one, definitely made before my time here!” So he got up from his desk and yelled upstairs, “Dean we have a customer here!!” (They are primarily a mail order business.) Dean came down and we proceeded to get along like long lost colleagues.

You see Dean has a story much like my own. He worked for many years at HP as an electrical engineer and was laid off in 2008. After deciding to not endure the ridiculous corporate interview processes with 20 somethings asking stupid questions like “What’s your five year plan?” he decided to pursue his passion; building solar panels. I shared my own story about being laid off in 2011 after 38 years in corporate America and ‘manned up’ to pursue my own dream of commercial photography. We both smiled and agreed neither of us would ever return to the corporate rat race. Dean and his crew built all of the early models including my original S5. He showed me the early prototypes he simply keeps in one of the kitchen cabinets in his office. He built his original laminator using the heat coils from a pizza oven, yes a friggin pizza oven! Obviously he’s moved on, but it remains in his shop as their ‘backup’ laminator. Hilarious and cool at the same time. 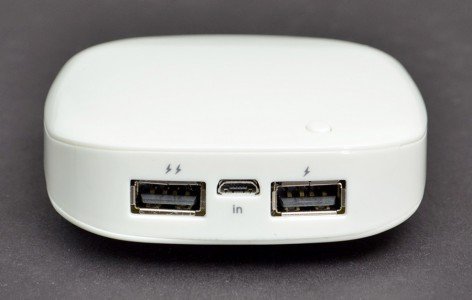 Their fantastic 6000mA rechargeable USB battery. This little puppy will now go with me whenever i travel. The perfect size/weight/capacity.

Built in the USA by guys who are great fellows just puts the ala mode on the pie! (I’m not a cake guy) Dean and his crew now have a customer for life. As I was driving home (with one of his new S8 units, their panel holder and one of his battery packs) I was reminded that no matter what the subject be it photography or electrical engineering, when we pursue our passions, magical things happen.