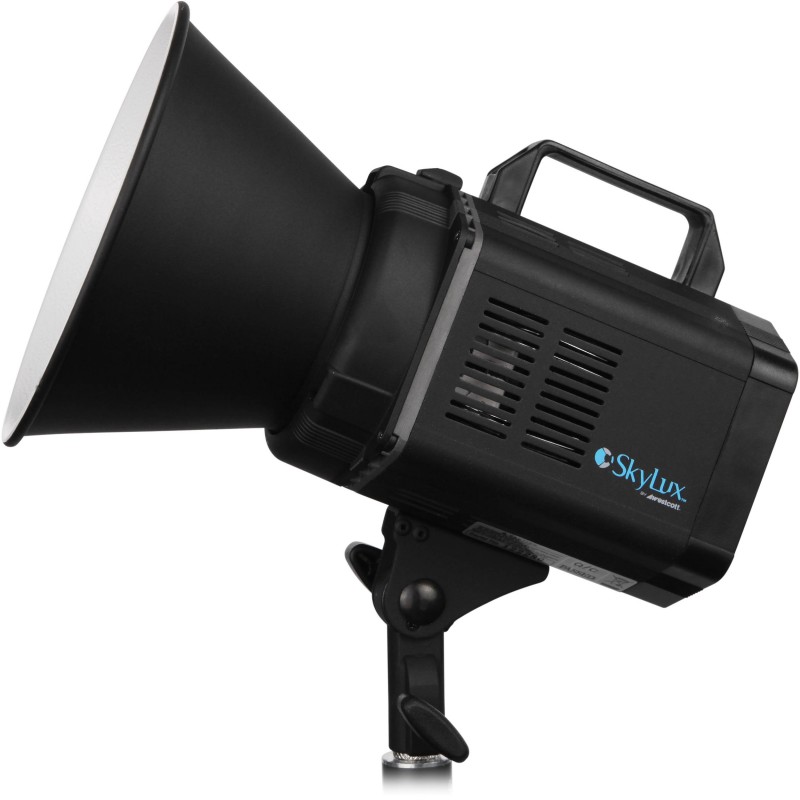 Constant light was never something I gave much thought. I’ve been a strobe user most of my life because I like the power of studio strobes. I use PCB Einsteins for the lion’s share of my work. They’re portable and plug in power free when combined with PCB’s Vagabond Mini Lithium batteries. Yet there have been situations where the flash of a strobe was not practical. Why? For a couple of reasons. Sometimes even at 2.5WS they’re too bright for very dark venues where I want to maintain much of the ambient in the final photograph. And in other situations like shooting at a symphony a sudden flash is too disruptive. I also avoided them because of my very first encounter with constant light. My teacher Greg Gorman had a HUGE tungsten light, damn near as big as those outdoor searchlights used to announce Hollywood movies and just as heavy. Hot and bright as hell even with a scrim between me and Big Bertha. I have no idea of its wattage, but in my mind it must have been something like 6 trillion watts! He wanted to show us how to use constant light and because he loved to torture me I sat as the talent for most of the heat of the sun temperature sessions….bastard! 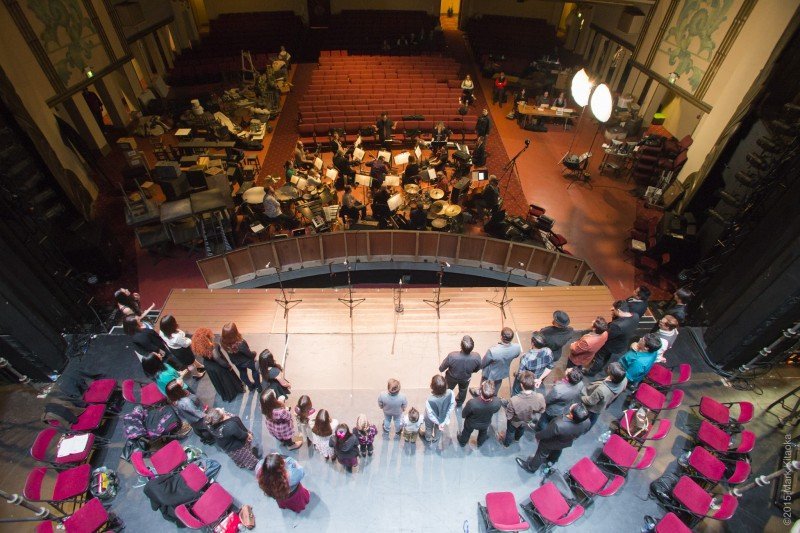 See those two BIG shoot throughs camera right? Yup two Skyluxs reside there. It’s damn dark in this Sitzprobe where the orchestra is seated. And using strobes? HA! They’re only using those dim music stand lights and would be blinded by strobes! 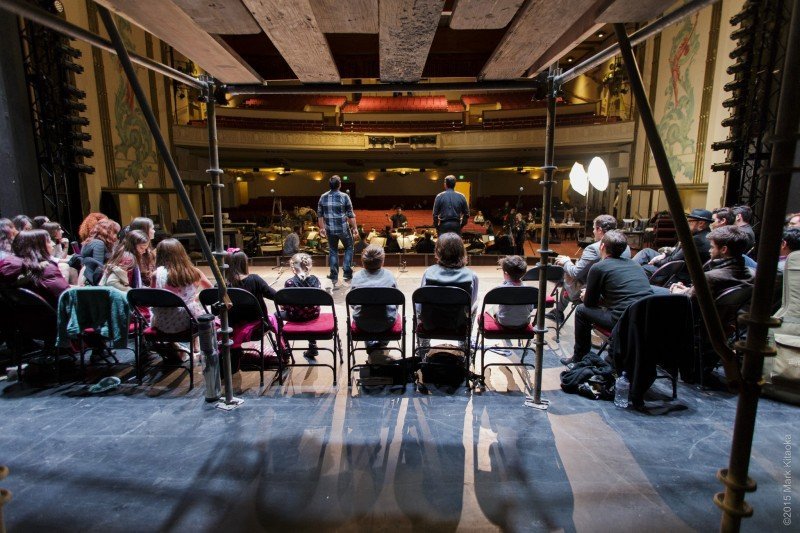 The talent on stage had very harsh stage work lights shining directly down on them with three spotlights in front coming from the house.

I originally purchased two Westcott IceLights to try constant light. ULTRA portable and they fit into my luggage nicely during airline travel. In truth my work life is primarily out of town and I seem to literally live out of my suitcase. So when I began to venture into the constant light world with the IceLights I found the value in using constant light. Very easy to hold ambient exposure in lower light venues while still making the talent pop. In addition my partner often films our sessions and the ‘pop’ of a strobe drives her crazy. We’ve used the modeling lights on the Einsteins, but at 250watts it really doesn’t supply enough power for her.

So I began to research constant light sources like the Kino Flo line of constant lights. Remarkable lighting systems, but very expensive for the amount of times I’d use them. Plus my perception is they would not travel as easily as my IceLights. Unfair to compare, but how much I can ship/check does play a role in my decision. I also looked at some of those ‘squiggly’ bulb lights. You know the squiggly bulbs that you can’t put a bulb held lampshade on. Most had at least four bulbs in them. They came with travel socks for the bulbs to prevent breaking. No thanks, more to worry about in my airline travel. 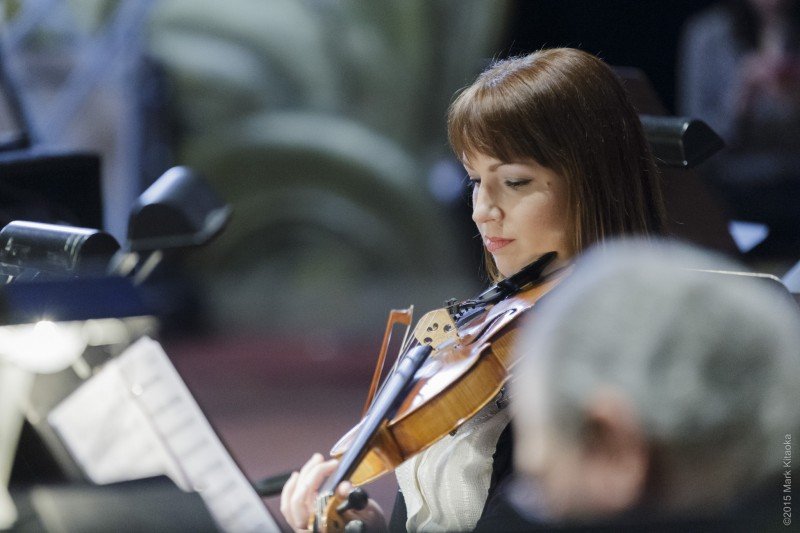 So we both visited some local photo shops to actually look and hold some different constant lights. That’s when I discovered the Skylux line.

I immediately fell in love with their size. Very light, significantly lighter then my Einstein heads. But then I discovered they use a separate ballast which is a long rectangular unit. That’s where the real weight resides. But as I came to realize I would not use any constant lights outdoors where long distance lugging would occur. And if you’ve read any of my other posts, lugging is not high on my like it list. The other feature that attracted me/us is the ability to easily use modifiers we already own on the Luxs. (Yes I shorten everything because I’m lazy) One of the things I did not like about the Kino Flo line or any others that are flat panels is the hassle and extra expense involved in buying new modifiers. Most of my modifiers use Alienbee rings, but I have a large collection of Bowens speed rings because my first strobes were Photoflex (RIP) Starflash units which use Bowens mounts. Umbrellas, soft boxes, octabanks you name it – Luxs can use them easily. 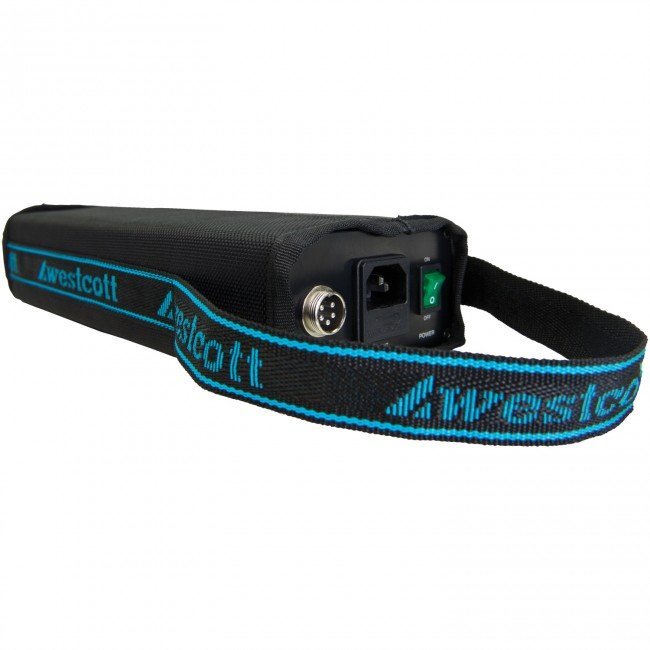 While at the shop my partner kept putting her ear up to the unit. My thought “I know it’s cold in here, but I wonder if her face is that cold that she wants the heat from the lamp? And they’re not hot, just warm…” When I asked, “What the hell are you doing?!” Her answer, “I want to see how quiet they are!” Oh yeah video people care about sound…. They’re quiet, not dead quiet but the fans are much more quiet than my Steins and those are quiet. Her verdict “These are great, they’re very quiet!” 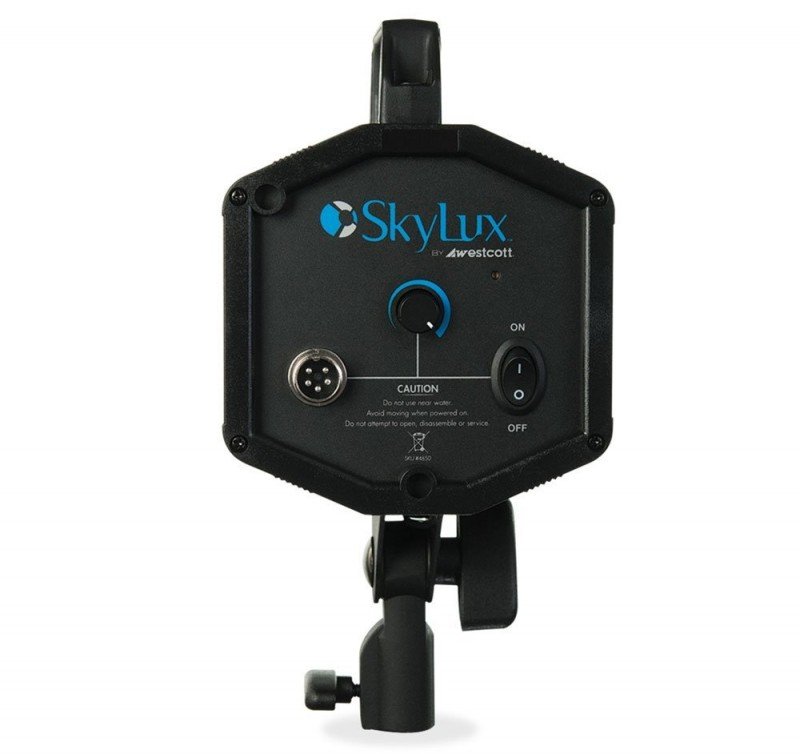 Back of Skylux head. Five pin power cable which runs from the ballast to the head. On/Off switch and dimmer switch.

And in practical application I found something I wish all strobes would have; flat front bulb covers! Why? Gelling the Luxs is a dream come true. Because the bulb covers are flat taping any gel to them is wonderful. A small 5″ piece of gel can be used in any speedring modifier, umbrella or any other light shaper. And the ballast I was worried about? When we used them with HUGE modifiers high up in the air the ballasts work so well as counterweights there was no need to bring sandbags….LESS LUGGING! 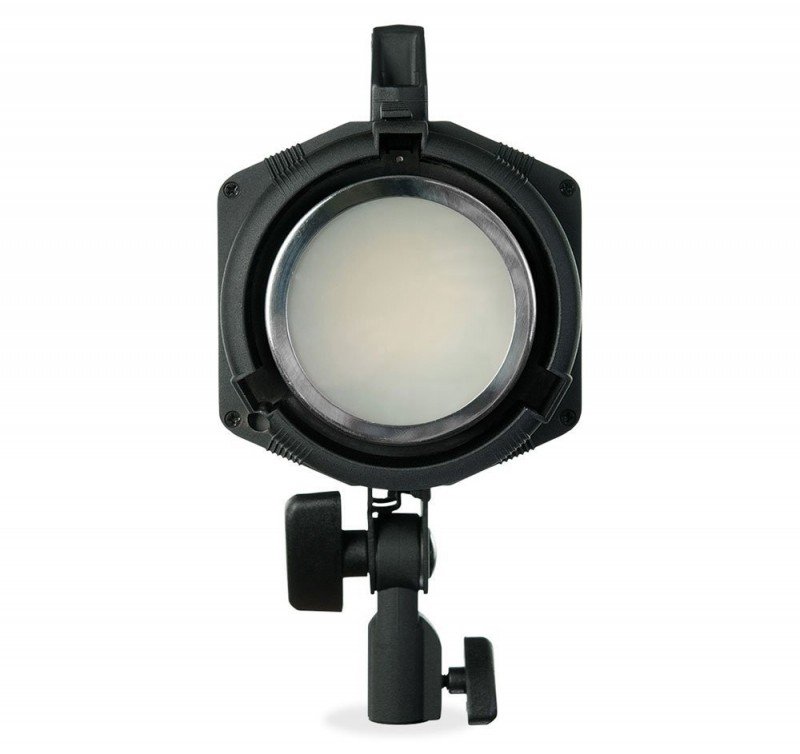 Just look at that flat front bulb cover! Hallelujah, some genius figures us photographers use gels! So simple!

So what would I like to see on Lux v2? Wireless remote control. I’m so accustomed to being able to control strobes from a single controller that I want it on the Luxs. The ability to assign groups, control light levels would be fantastic. And if that can’t be done, placing a dimmer on the ballast would be grand. Right now only the head has a dimmer. So when the head is high up in the air you must bring it down to adjust the light. The ballast has an on/off switch so if push comes to shove you can always turn the light off without lowering the head. 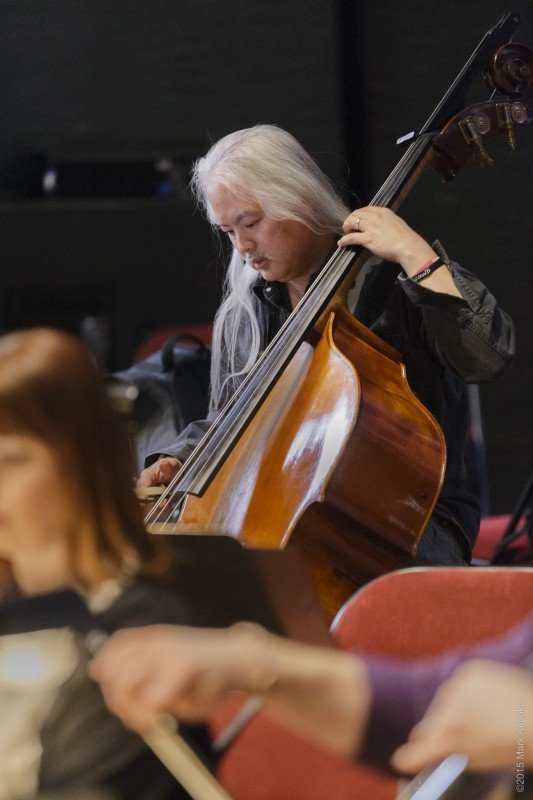 From any angle we were able to shoot at will without disturbing the talent.

Would I get them again? Oh hell yes. They are the perfect combination for stills and video when constant light is what I need. Small, durable and easy to use as well as travel friendly are all I can ask from any light source. I may even use them in a studio shoot as the main key light….. stay tuned!

Here is a video of the session using the Luxs for the orchestra.