There are many times when we are thrown a ‘curve ball’ when it comes to professional sessions. Although I try to always come prepared for the unexpected, there are times when I haven’t anticipated every possible scenario which can occur. And besides, my loathing of lugging means I can’t carry every single piece of gear necessary for all occurrences. Such was the case this week during one of my client sessions. 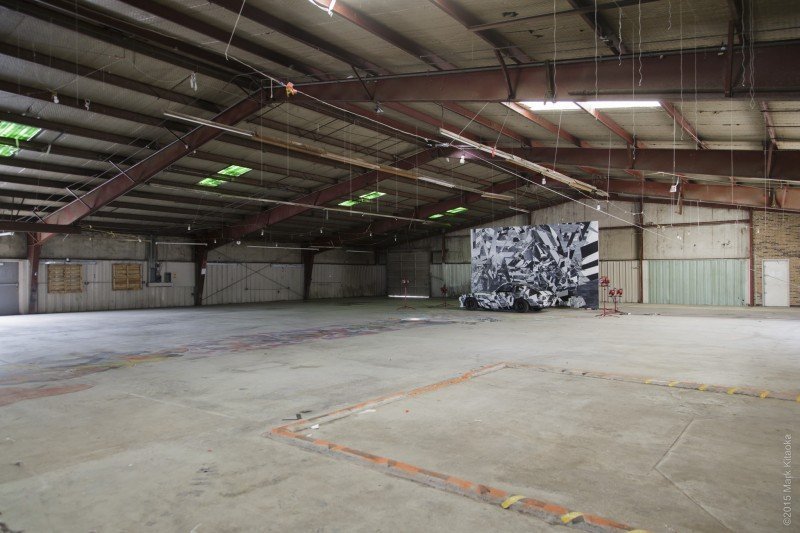 The warehouse space in all of its photographic glory. If you look closely you can see the four pairs of shop floodlights that saved my day.

During an arts festival one of my assignments was to do some editorial work of an artist in his warehouse/studio. No one could tell me about the space because at the very last minute the venue had to be changed for legal reasons. My assignment was strictly editorial in nature, no portraits just imagery that would capture his studio and the patrons visiting his exhibit. So I decided to only take two DSLRs and my trusty Fuji X100T along with some lenses of various focal lengths.

I placed the address into my trusty GPS unit and when I arrived I was confused. The location was in a heavy industrial area and the address was a dilapidated warehouse. About 20,000 square feet of corrugated green tin metal with a pitched roof. No one was at the address so I contacted the marketing department to verify the location. Yup I was at the right place so I waited in the heat and humidity until the artist arrived.

I was also not given any details about the exhibit. What was the ‘art?’ How was it presented? Could I know anything about the artist? Nope, nope and more nope. It ends up the artist had created an art car as well as a very large format piece which corresponded with the car, a vintage Datsun 280Z. (Nissan to you too young to remember Datsun) Inside this 20k square foot structure were some hanging bulbs and some shop floodlights which he had used to illuminate his art. There were also several skylights and because of the heat about eight roll up doors which he opened so none of us would suffer heat stroke.

I was scheduled to arrive at 12:00pm. The event was to begin at 1:15pm and by 2:00pm not a single soul had arrived. I had another venue to cover for the festival at 3:00 which was across town so I had to leave. But without ANY shots? Nope that would never do even though the subject matter in this case, art viewers were not around. To return to any client without a single shot even when one of their own marketing team was there and knew the situation? No way. Giving them something is always better than nothing, unless the shot you created under those circumstances is pure crap. Then it’s best to explain what happened and just pray….

So I improvised and decided to do a portrait of the artist as well as him explaining his project to the ‘guests.’ No guests? Well since my partner was there along with one of the marketing individuals I decided to stage a shot with all three people. I arranged my partner and the Marketing person with their backs to the camera so no one would recognize them and say “Gosh that looks a lot like Mark’s photo partner and someone from their Marketing Team!” 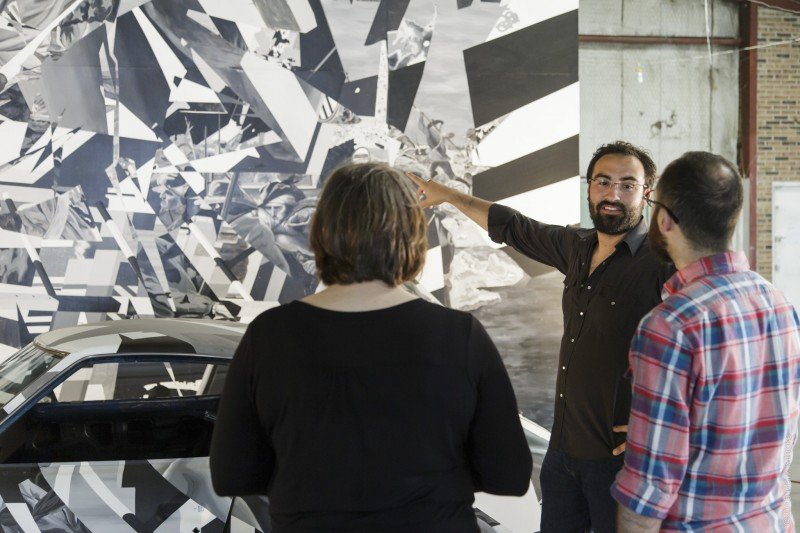 The artist explaining his vision and concept to ‘the guests.’

And what was I to do to create a portrait with any production value without my lights? I decided to use one of the four pairs of shop flood lights and placed it behind the car facing through the passenger window area toward the talent. (The car had no side door windows) The vehicle is painted with black and white paint as is the large format painting behind the car. By using his tungsten flood light it would give a warm tone to his face as well as give me a rim light to separate him from the vehicle. The windshield would act as my ‘reflector’ wrapping light around his face. As I looked at the setup it appeared that the image would look like it was color isolated in post. Kind of cool actually.

Instead of using evaluative metering I opted to use Center Weighted Average metering. Why? To help isolate him in exposure from the rest of the scene. Why not Spot Metering? It would not have given me the affect I wanted making the ambient around him too dark. I think we sometimes overlook our gear’s metering choices and it’s a common mistake, but can give you the mood you want when you don’t have a lot of choices. Like in this case!

And yes smoking is now a ‘no no’ but since the artist DOES smoke I felt it would add to visual and character interest. I simply instructed him to ‘fire one up’ and took the shot. Backlighting is one of my favorites when there’s smoke and it illuminated both the talent and the atmosphere well. In post I applied a Bleach Bypass layer to reduce the color in the final image. 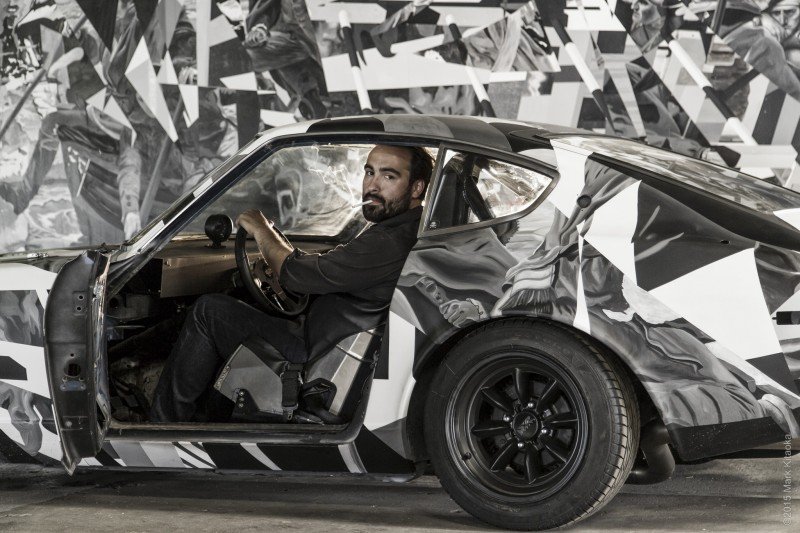 My final portrait of the artist using what I had on hand to light him.

Improvising can be a bitch, but with just a little imagination, knowing how light can help and knowledge of your gear’s capabilities – well it can save your ass.

improvisation thinking on your feet