In response to a question left below this post I am updating it to show how the eVOLV 200s fit nicely onto the AD-B2 Twin Head Bracket with the Skins attached. I’ve also included how I pack my Pelican 1510 Case With Padded Dividers (one of many I own!) to travel when using one xPLOR600 and three eVOLV 200s. BTW this size of Pelican is carry on legal for domestic travel in the US. 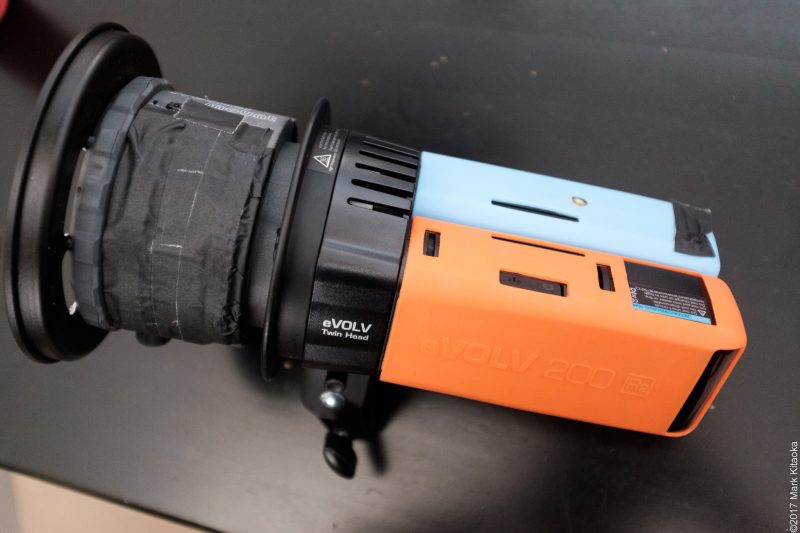 Side view of the Twin Head with two eVOLVs attached in their Skins. 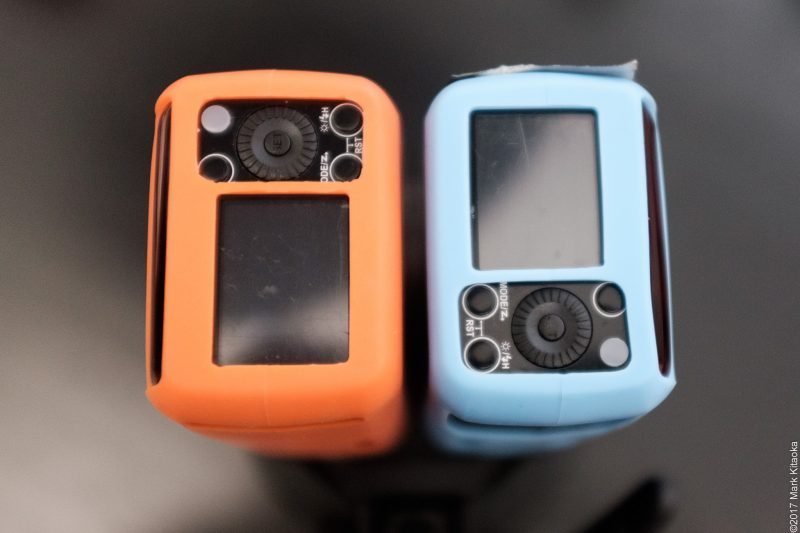 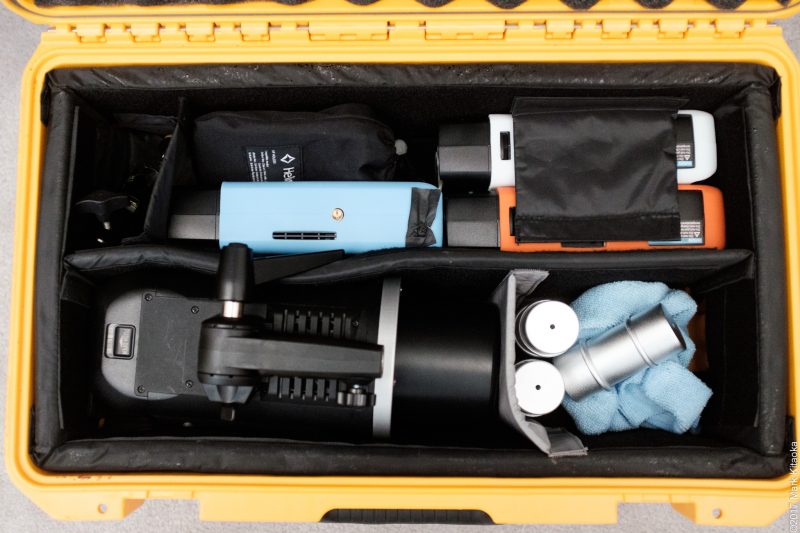 Pelican 1510. I carry the AD-B2 Twin Heads in a separate case. Those cool bulb covers are CL-200X Bare Bulb Flash Tube with Cap by Cheetahstand and I love ’em! Because I use the Twin Heads now I simply store the bulbs in his covers to transport. Just wrap the bulbs in a plastic bag and shove them into the tubes and you’re all set! 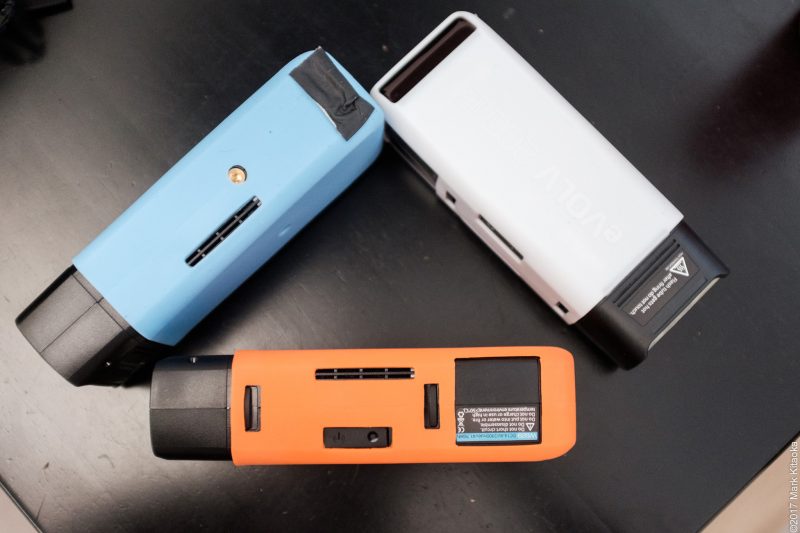 Really well done! All of the holes line up perfectly on the 200. And it fits well. The black gaff tape on the blue one is what I use to use to ensure the power switch would not get turned on by accident in my bag. But now there’s no need to use that because the switch is recessed by the skin.

Like all things there are items that make tons of sense to some people and seem frivolous to others. It’s that way with everything. During my on course motorcycle road racing days I laughed when others would have fancy rear sets, carbon fiber this and that added to their race bikes. I found more functional items better. Like all things, to each his own. Such is the case with the Flashpoint Silicone Skins for eVOLV 200s. I laughed when I read on a blog “A fool is easily parted from his money” in the discussions about the skins.

I must admit that when I first was made aware of the skins I thought to myself “Uh those seem a bit silly, but they sure are colorful!” And then I wondered if the cutouts were accurate. I had a terrible experience with LPA, better known as Pocket Wizard when they released their FlexTTL line of triggers for the Canon 580 line of speed lights. The range was poor and their answer was a cluster fuck of comedy. First they sent us a ‘sock’ that we were to wrap around the speed lights to increase the range. This was until they produced a hard shell ‘case’ for the 580s to ‘shield’ the receivers from the errant RF signals produced by the flash unit. But when they produced the hard cover you could not fit an external battery connector into the speed light. Worse yet they then manufactured a workaround plug and CHARGED YOU FOR ONE. That customer service fiasco put the nail in the coffin for me and I’ve never even looked at LPA gear since. For me customer service is as important as the gear.

So the first skin I got was an orange one. I was very pleased to find that it fit the eVOLV perfectly. All cutouts are accurate and the fit is, well like a glove. I love the material since it adds grip to the unit. You see I’m a grip tape addict. I’ve put grip tape on EVERY SINGLE strobe I’ve ever owned. I had to send two Einsteins in for repair and Lori their stellar customer service person sent me a note asking if I had stock in 3M because of the amount of grip tape I had on my Steins! In the heat of setting up and striking, myself, my assistants, my partner are all furiously working. Dropping a light BEFORE the shoot would be horrible. Most lights are a bit slippery so grip tape is a godsend. It may look ugly, but my clients could care less how much I tape my gear. (My Fuji X100T has more grip tape than I care to admit) 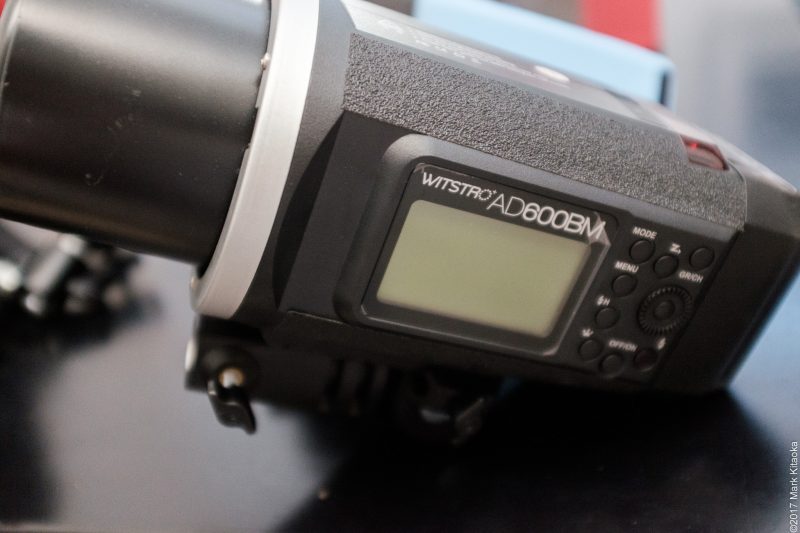 You can only see on strip of grip tape in this photo. Trust me, there’s an ugly amount more…. 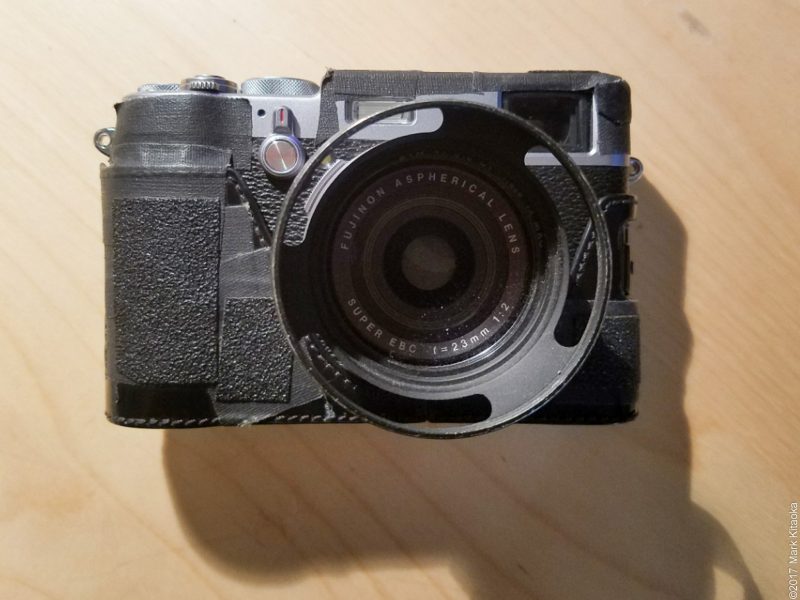 Yeah I’ve made the poor girl look pretty damn ugly, but I love her to death! Beyond being ‘nonslippy’ it makes her look so bad that nobody ever wants to steal her. I once left her on a restaurant seat and the waitress followed me out yelling “Sir, you forgot your old camera!” as she chased me! LOL. When I use my Fuji for some client shoots they lovingly refer to it as “Mark’s magic little Instamatic.”

The second and unforeseen benefit of the colors is being able to tell what group I’ve set each light to. I can certainly see that this would mean very little to those who use one or two lights. But I seldom if ever use less that four lights during a session….and my memory sucks. I currently use Kids’ ABC Flash cards hung from my light stands to identify which light is in which group. But when I’m using the eVOLVs now I have a Post It on my controller that says “Orange A, White B, Blue C….etc.” 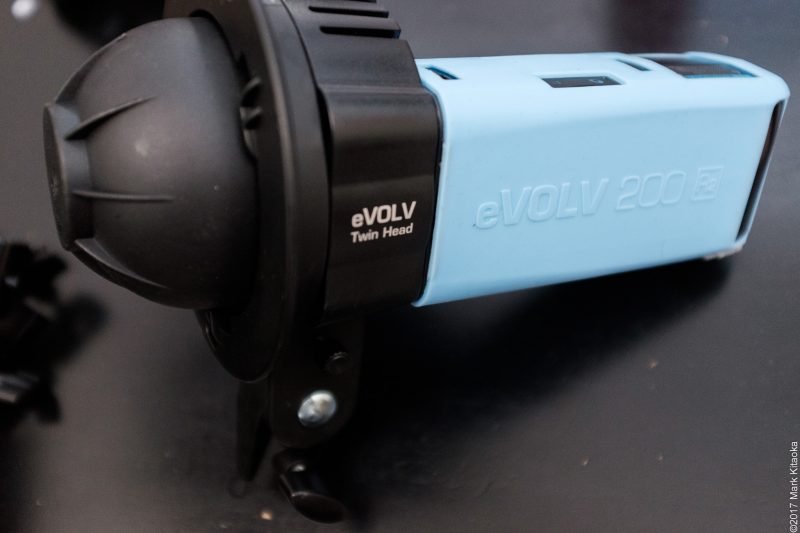 Even I can’t miss the color!

Will they protect the units if they’re dropped? Donno….maybe? I’ve only ever dropped one strobe, an Einstein from waist height onto concrete. Bulb broke, modeling light broke. Had an xPLOR600 fall over on location. Fell onto dirt from about 7 feet up, impact was on the modifier, a PCB Omni reflector. Reflector took a nice beating, but nothing happened to the strobe. 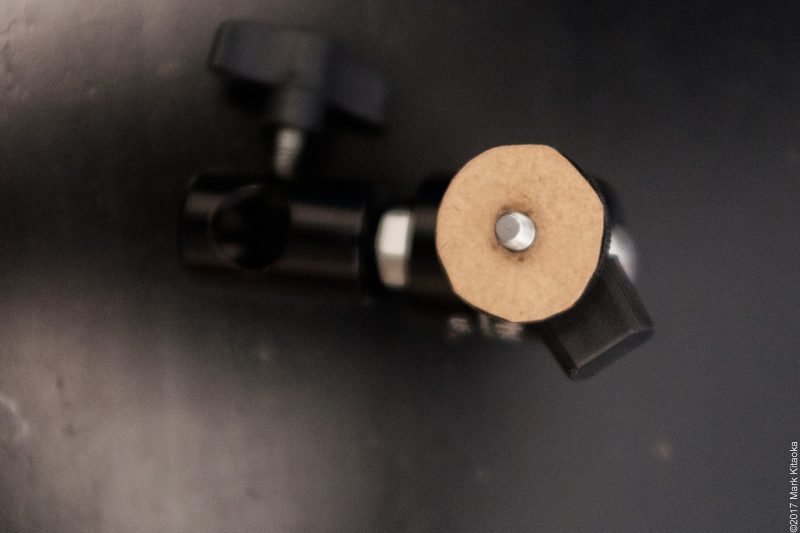 My homemade fiber washer on my umbrella swivel. 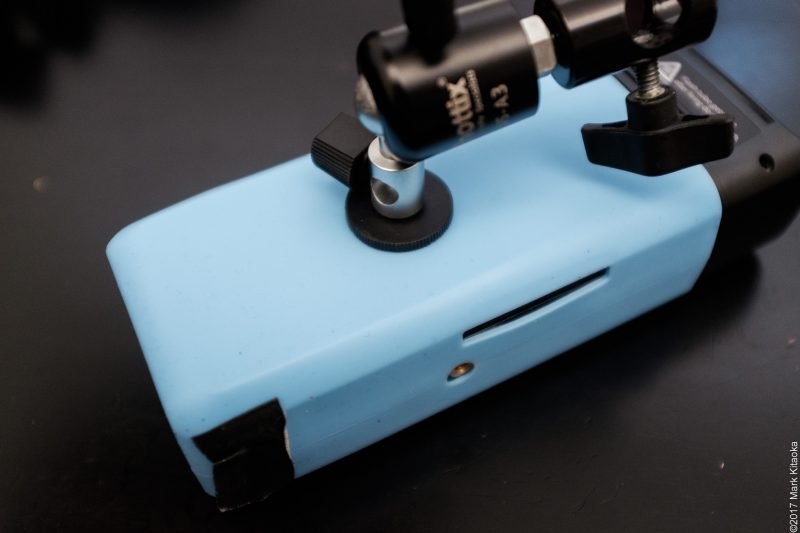 Pretty cool that a real side benefit that the skins keep these strobes from rotating….one of my pet peeves is put to rest.

A third benefit I also did not anticipate is not having to use homemade fiber or rubber washers on my grip gear now. Because the skins are silicone they grip really well when tightened down onto a small surface like an umbrella swivel. Never thought of that, but it’s great. Do I like them? Yeah I do and I didn’t think I would. But then again, to each his/her own!