I have been using the R2 Pro Mark II C when using my Canon 1DX Mark II and my partner has been using the R2 Pro C. When we go to a job I use the Scan feature and we pick which channels to use. I have had less than 2% of misfires. She has experienced the same, but has had full pop flashes when her units have not been set to full power. This is still an issue that Godox and Flashpoint must address.

NOTE: I have recently been using the Flashpoint R2 Mark II TTL Transmitter (X2T-P). That post can be found here.

OK so I needed to actually TEST my Flashpoint triggers to ascertain what is the best trigger for me to use. I had become (and still am) very concerned about the misfires I have been experiencing. So here are the triggers I tested: 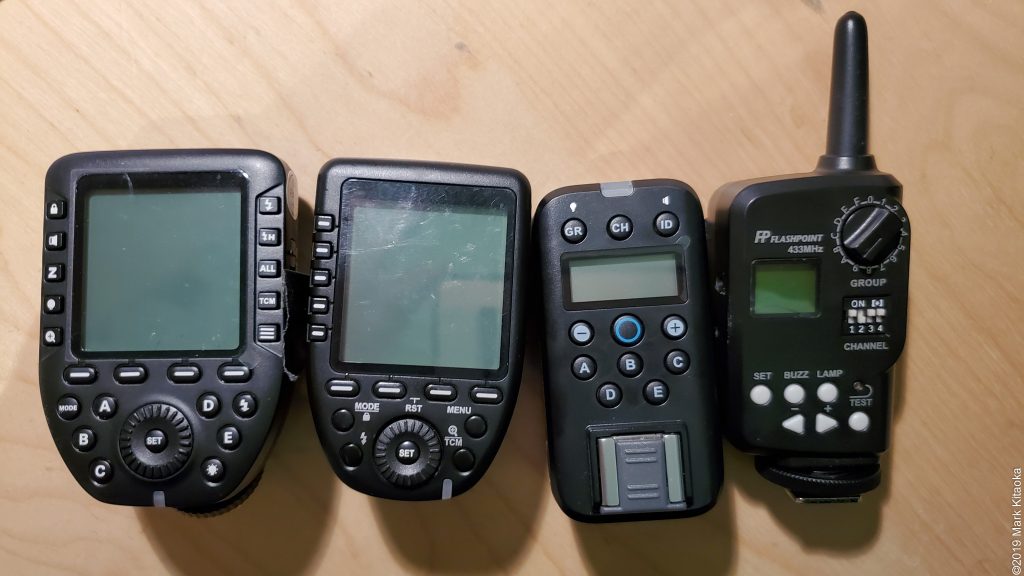 I used the very same strobe for all of the tests. A Godox AD600 set to 1/16th power 10 feet from my camera. The camera was a Canon 1DX set to 1/250th of a second shutter speed, f3.2, ISO 100. My intervalometer was set to fire at one second intervals. The strobe began to overheat at approximately 400 frames so I measured my test at 400 frames. I allowed the strobe 30 minutes between trigger testing so that it could cool down.

Here are the results: 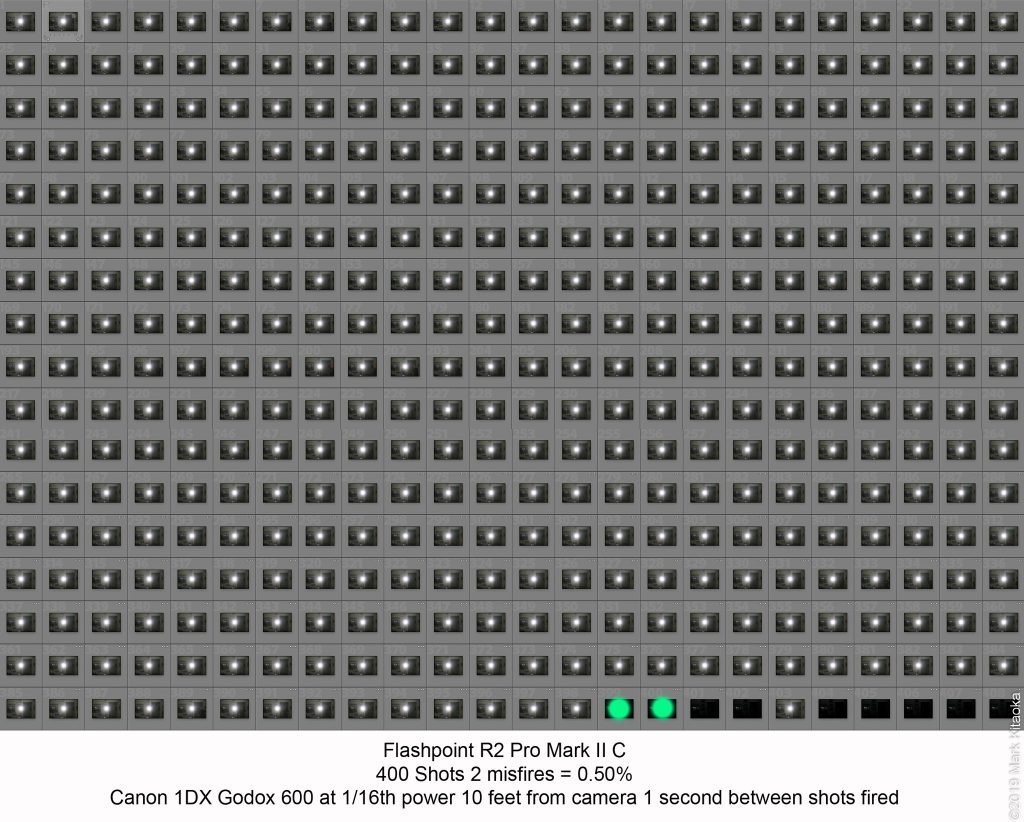 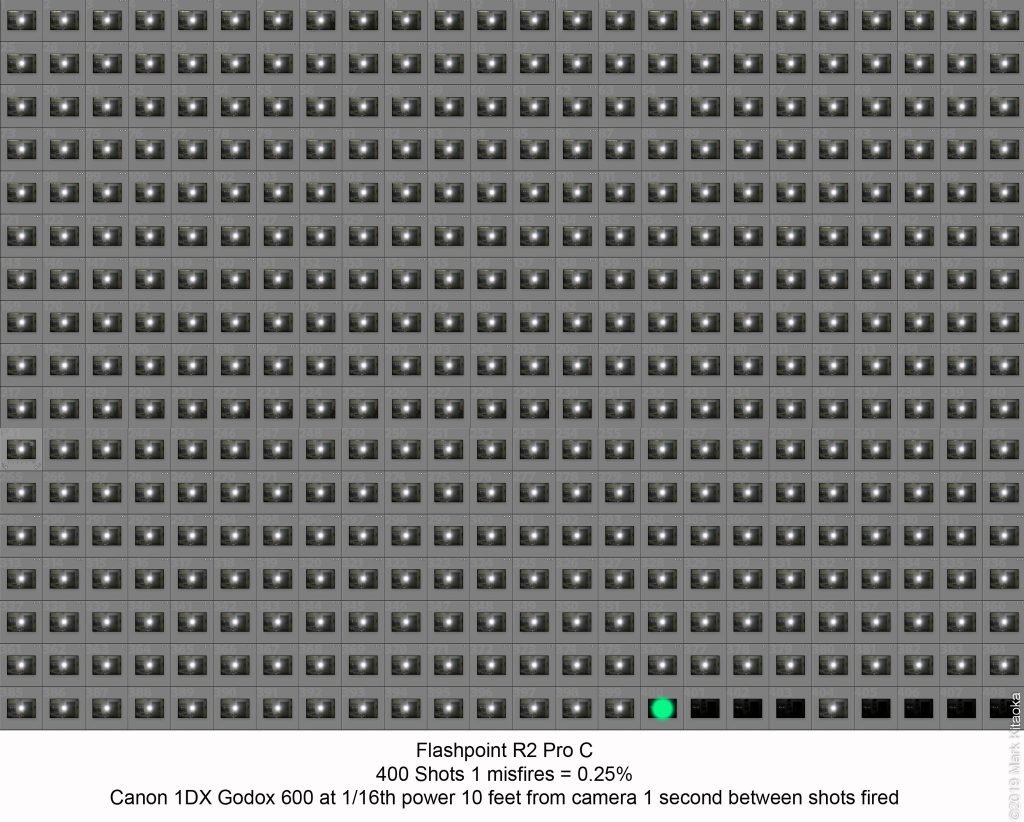 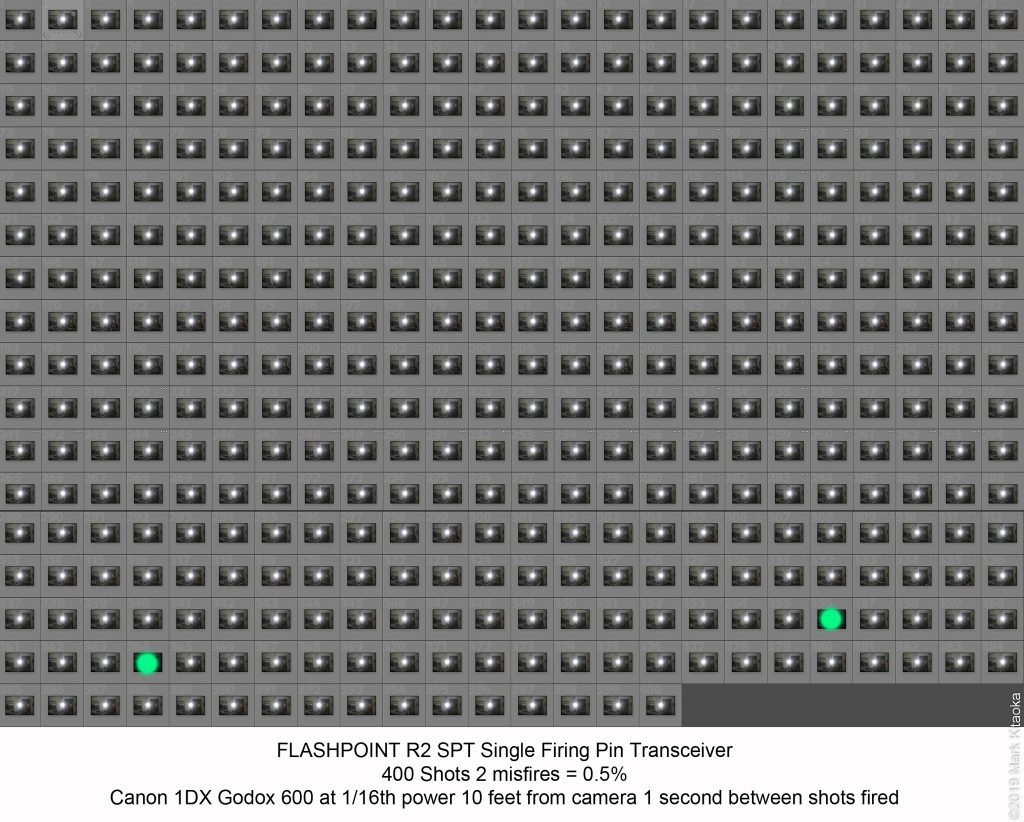 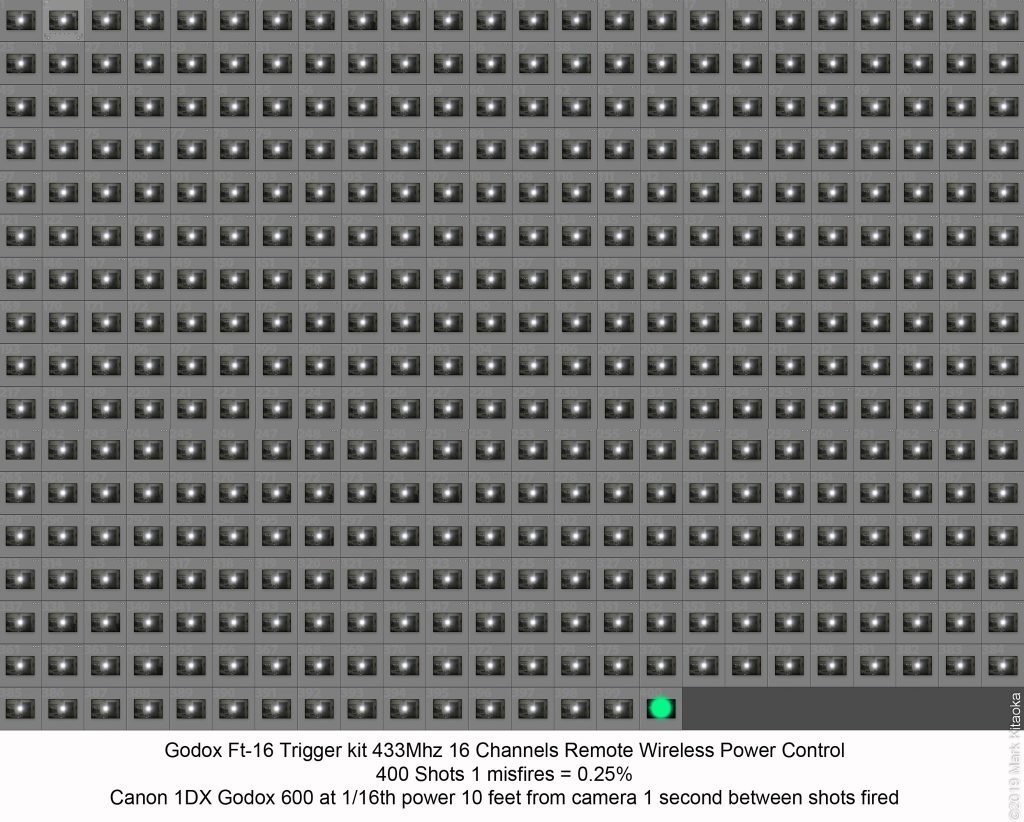 So after running this test I am still concerned. In this test all triggers failed, but under 1% out of 400 shots. It’s curious that the single pin unit is the only one that failed to fire prior to the end of the test. With all of the others I ‘may assume’ that the failure at 399/400 was due to the overheating of the strobe. In a normal real world session the power of my strobe settings varies greatly. Anywhere from 1:1 full power all the way down to 1/256th power for fill or rim lights. There are times when I am firing much less than once a second and I’m always aware if I have strobes set at full power to listen for the recycle tone before pressing my shutter again. It’s part of my protocol.

My most critical time for zero misfires is during studio dance sessions. Invariably misfires will happen when the money shot is taken when a strobe or strobes misfire. The dancer has executed their move in an exquisite way and the shot is useless due to the failure to fire. Sure they can do it over again, but my view is why? My equipment should be dependable. And if that means switching to a brand that is not as modular, but is much more dependable on site then that’s what I will do, change.

I will say that prior to running this test I used the Channel Scanner on the R2 Pro Mark II C to find the best available channels for my home…today. I say today because I feel that even in the same venue, it’s important to scan the environment for the best channel. So at this point I am awaiting a new Flashpoint R2 Mark II TTL Transmitter for Pentax Cameras (X2T-P) to test. I am hoping it performs well. Currently Adorama does not offer a R2 Pro Mark II transmitter for Pentax, nor do they offer a firmware update for the R2 Pro for the Pentax. My 645Z is my defacto studio camera so it’s one of the reasons I’ve purchased the X2T-P. It has a channel scan feature. Sure I can carry my Canon Pro Mark II to scan channels, but why? If Godox/Flashpoint want working pros to use these strobes, then give us function and dependable engineering. You’ve nailed the ecosystem but misfires just won’t cut it in my world.

I have a publicity session this weekend and hope that by scanning the channels it will yield this percentage of misfires which is much less than what I’ve found on actual location shoots.

In preparation for an upcoming client session I needed to practice a lighting technique we conceived for the shoot. I had left my R2 Pro Mark II C transmitter on channel 12 along with the strobe from my recent client shoot this past weekend. I did NOT use the scan feature to see what were the most clear channels in my garage. I was horrified to find a 14% misfire ratio during my test set up! I was literally 8 feet away from the strobe with the transmitter set to the 0-30 meter range while using a Flashpoint Pro 600. I had never had issues like this with my 433Mhz triggers or USB receivers. I really love the innovation of the Godox/Flashpoint line of strobes and the ecosystem they have developed. But the misfire issue may result in my switching to a different brand of strobes. I need to figure this out quickly. Until I do I will religiously scan the channels and/or use my single pin transmitter. I cannot afford to miss any shots ESPECIALLY in dance.

I had a two day dance session this weekend after updating all of my AD200s/600s and my R2Pro Mark IIC transmitter. Once I conducted a scan of the area in which I was working one of the channels the transmitter recommended was 12, so I switched everything to that channel. With the new firmware the results are much improved over my prior experience. Of course I would like a 0% failure to fire rate as I had with my PCB Einstein/CyberCommander setup. I will continue to update this post about the misfire issue. 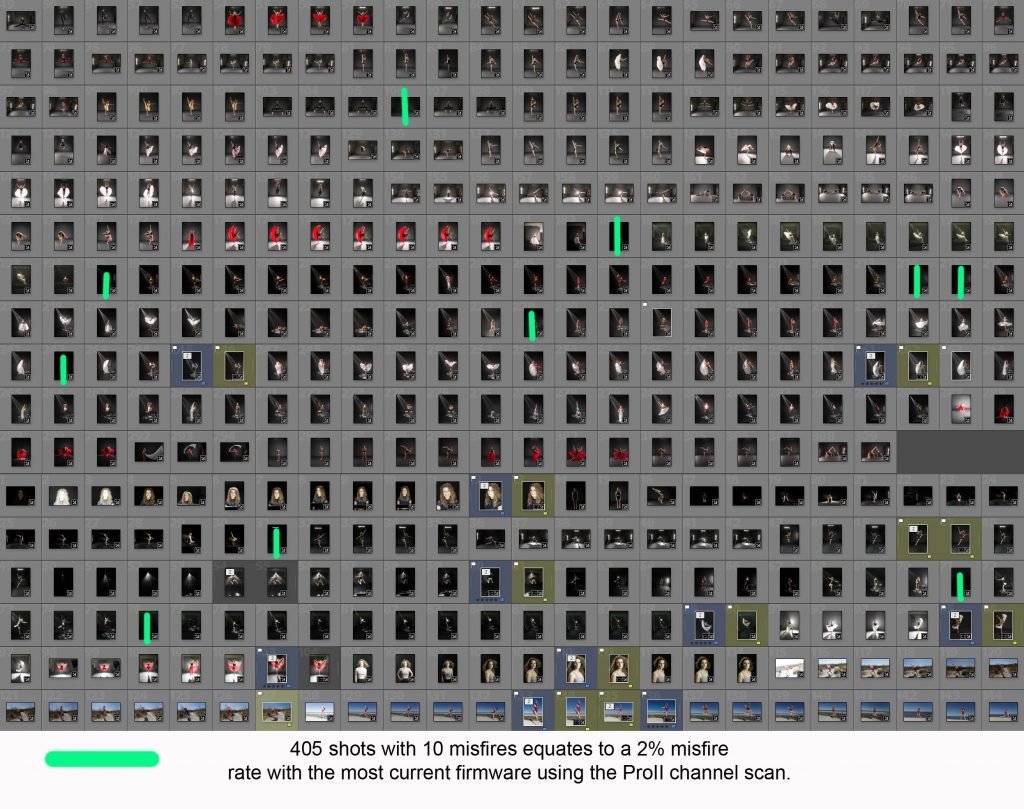 My gut tells me that even in the same space I will need to rescan with the ProII to ascertain if the same channels are free on different days even in the same space. I have asked Adorama if I can use the channel scanner on the Pro Mark II to determine the best channel for my Flashpoint R2 Pro Pentax trigger. Once I hear back I will post my findings here. As usual stay tuned…

I have been negligent in updating my firmware for both the transmitters and strobes be they Flashpoint or Godox. I completely switched from PCB Einsteins over to the Godox/Flashpoint strobes after the passing of Paul Buff and the innovation at PCB declined after his death. His CyberCommander transmitter was tough to learn but BULLETPROOF in terms of misfires.

I won’t go into all of the gripes I had about the Flashpoint misfires simply because I had not updated my firmware. Total user laziness and error. So I decided to run some tests before and after updating my strobes and transmitters. I used the installation programs and firmware found on Adorama’s Flashpoint Firmware Download page.

Even though they have improved the software interface, it’s still no walk in the park. You should know I am a PC user, not a Mac user. The steps I found necessary to begin the process in Windows 10, their new version is: 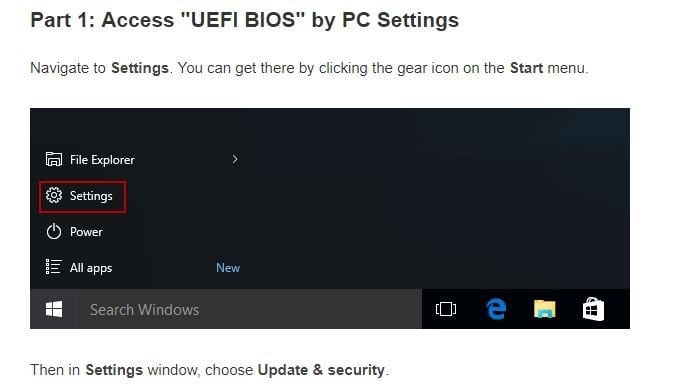 Then you must select the product you are updating which then indicates which installer to download and use. There are three: 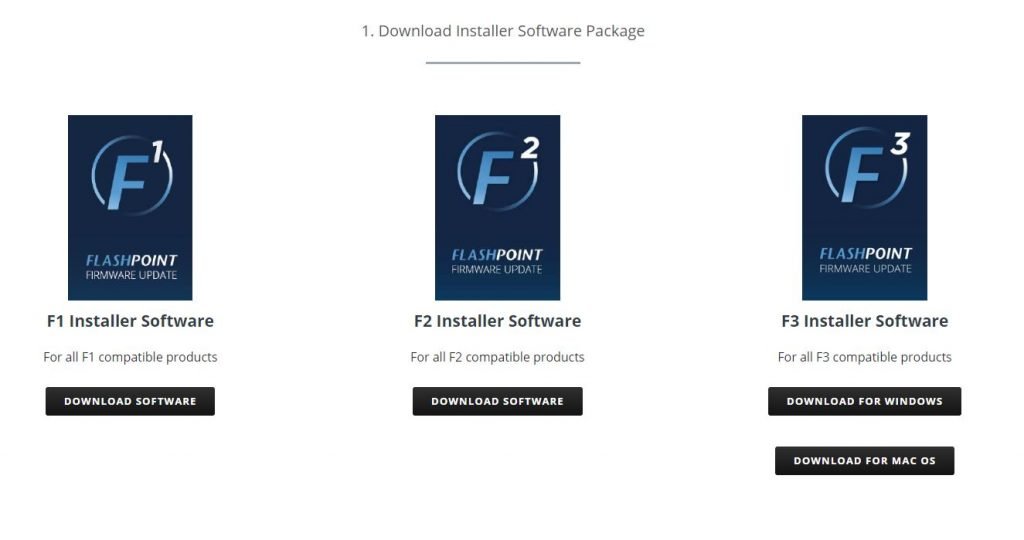 Once the installer is downloaded and installed, you select the product you wish to update with the firmware: 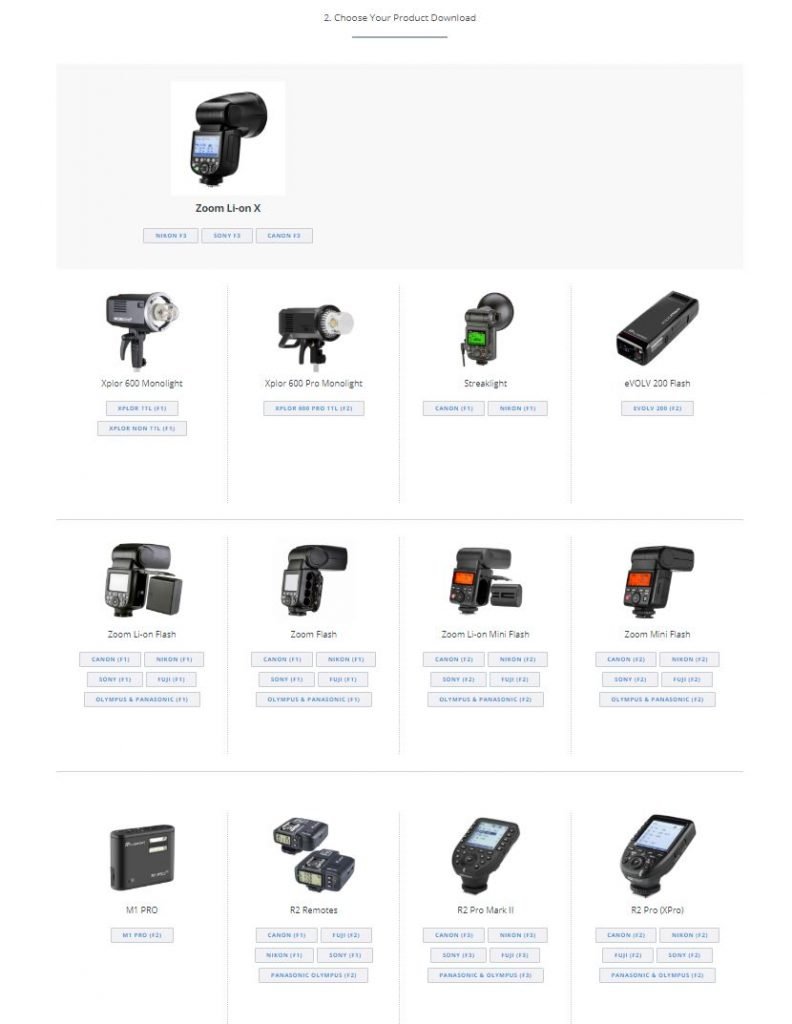 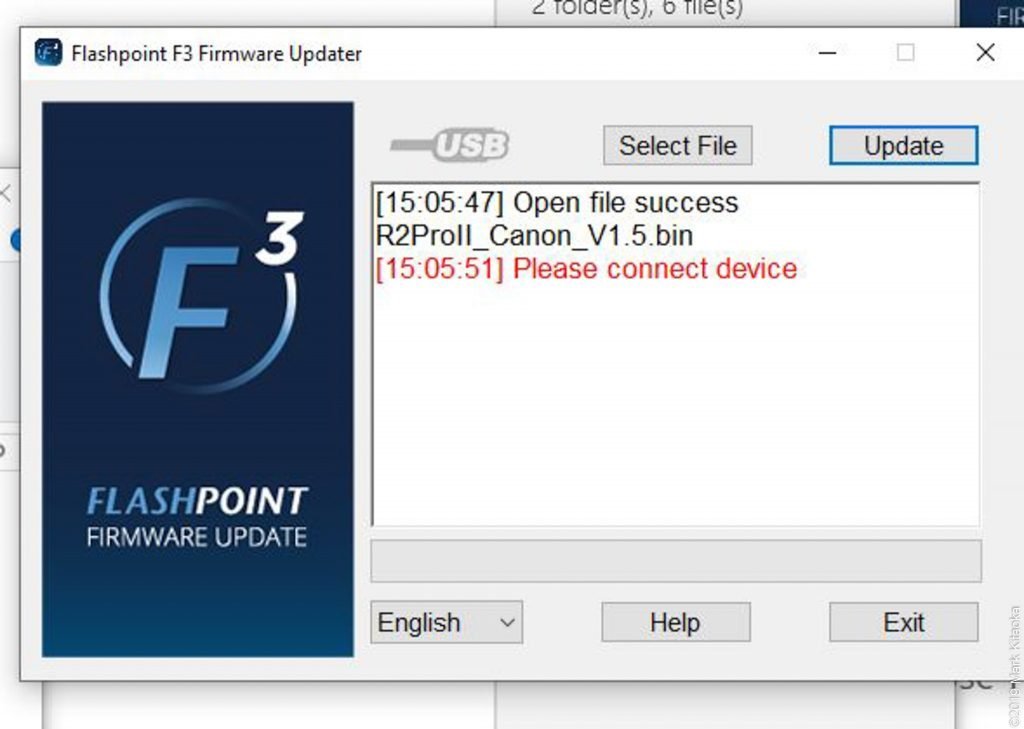 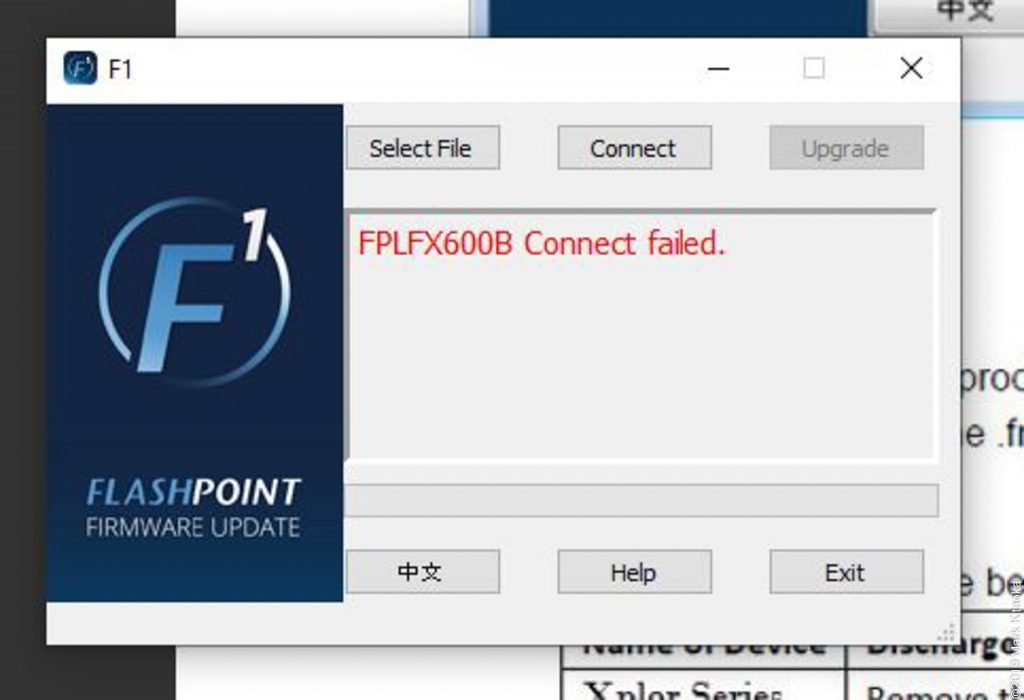 I THEN realized that the USB Micro cables I was using DID NOT TRANSMIT DATA but were only for charging! SHEEEET!!!! As soon as I figured out that bonehead mistake I used a proper cable and got a connection. BUT it was not without further issues….. On my first two f/w updates all went fine. But after that I would get a program hang: 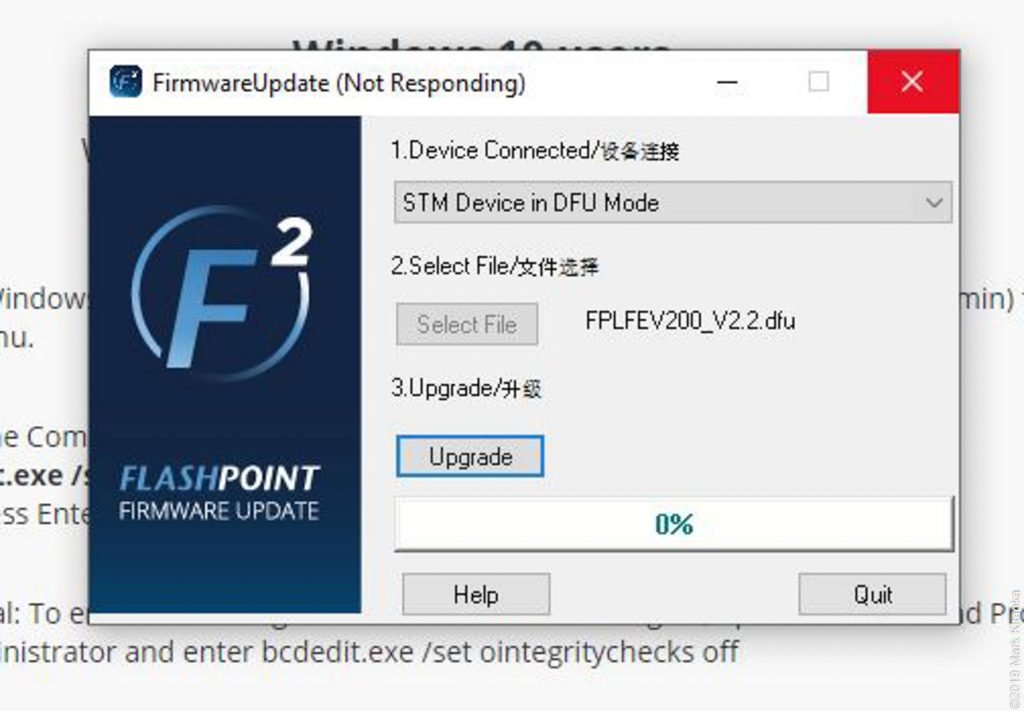 It only happened after the f/w was deleted and then updated. So I simply unplugged the cable and tried my strobes, also checking their firmware version. All was fine. So after this frustration I went on to test my strobes. 600s, both non TTL and TTL along with a Pro and several AD200s…

Here was my setup for testing: 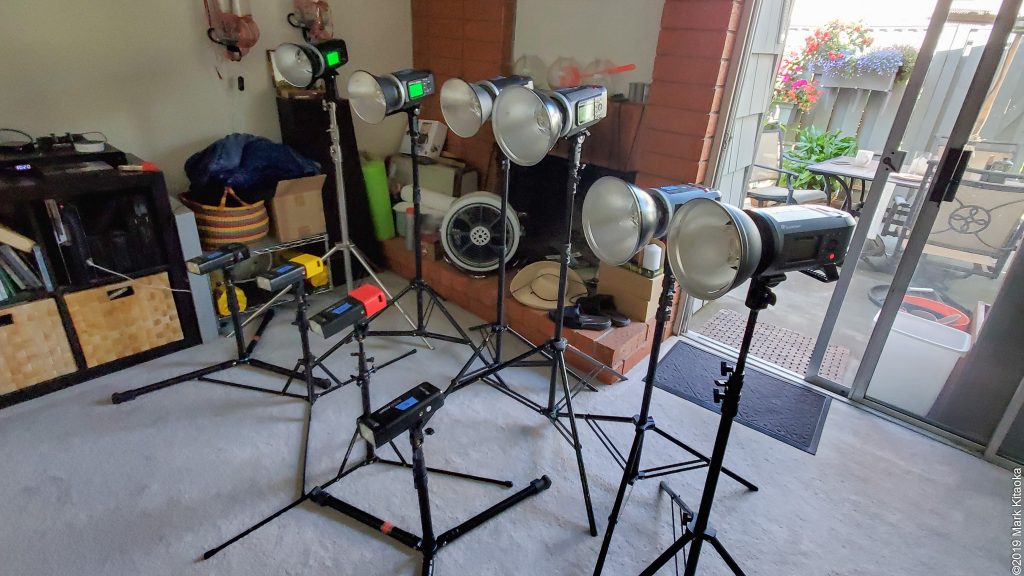 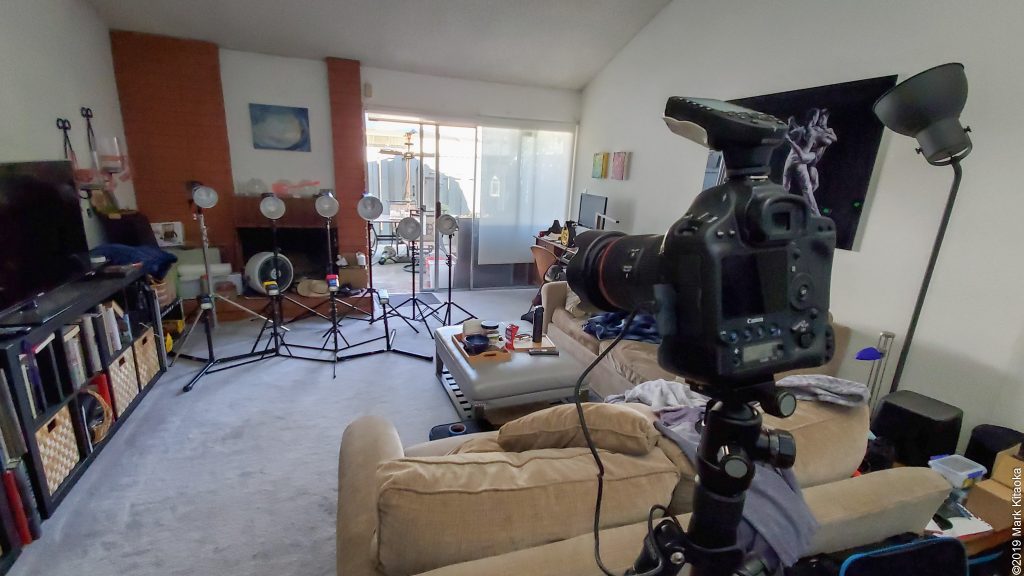 I set my intervalometer to take a shot every second. My tests were done at 1/8th and 1/16th power for all strobes. As you can see I’m only about 15 feet from the strobes. I have a router booster here along with normal consumer electronics. Since I’ve had issues on location where there’s a ton more signals this is not an acid test of if the firmware will make a difference in misfires. But it was my start of testing. On my pre firmware update testing I had NOT updated the firmware for the strobes or the triggers. 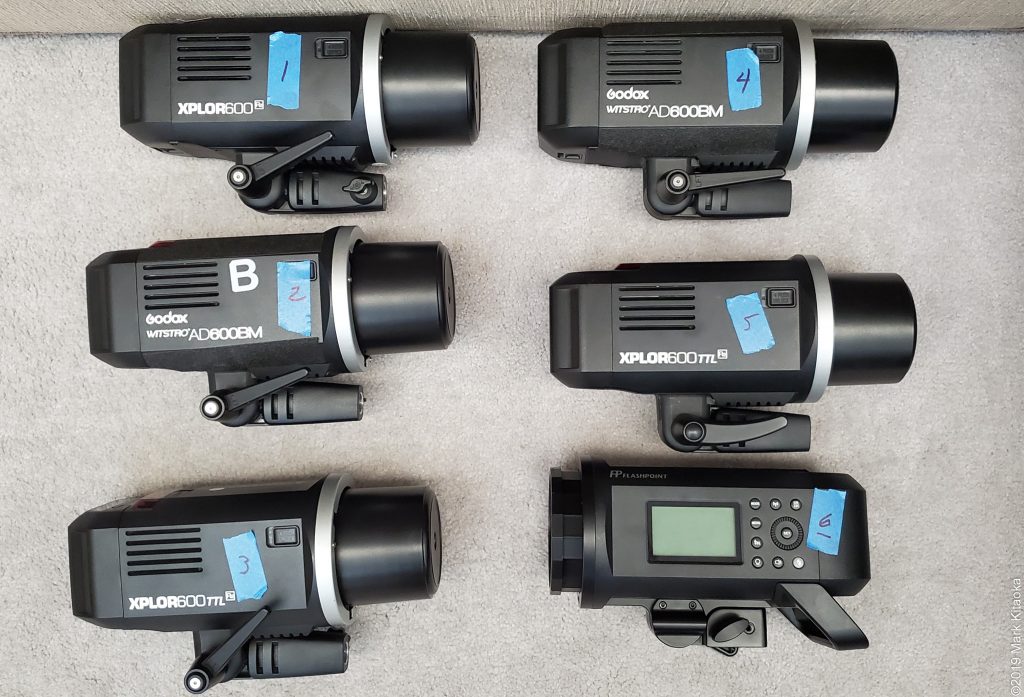 I numbered each strobe. I also numbered my 200s but have not included photos of them here. My main concern were for my 600s since they are my primary strobes for work. 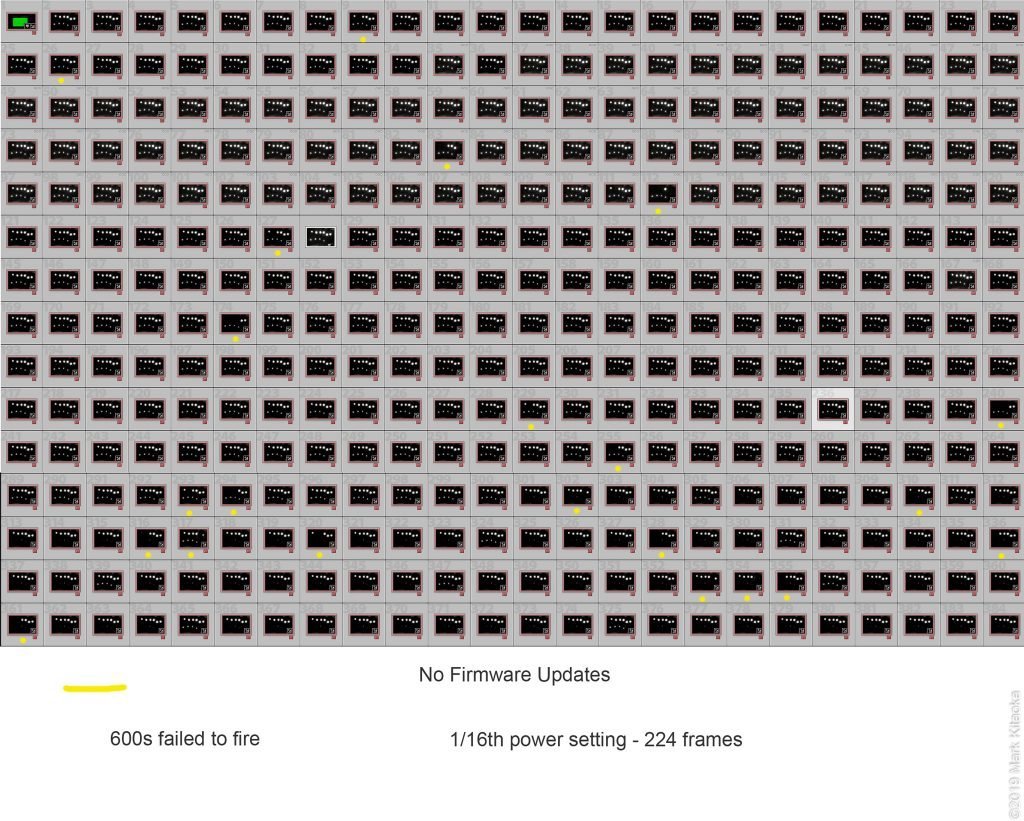 In my first test strobe 2 was the one that consistently misfired. And like a fool I forgot to check the f/w version before starting the test…..but it is one of my older strobes. 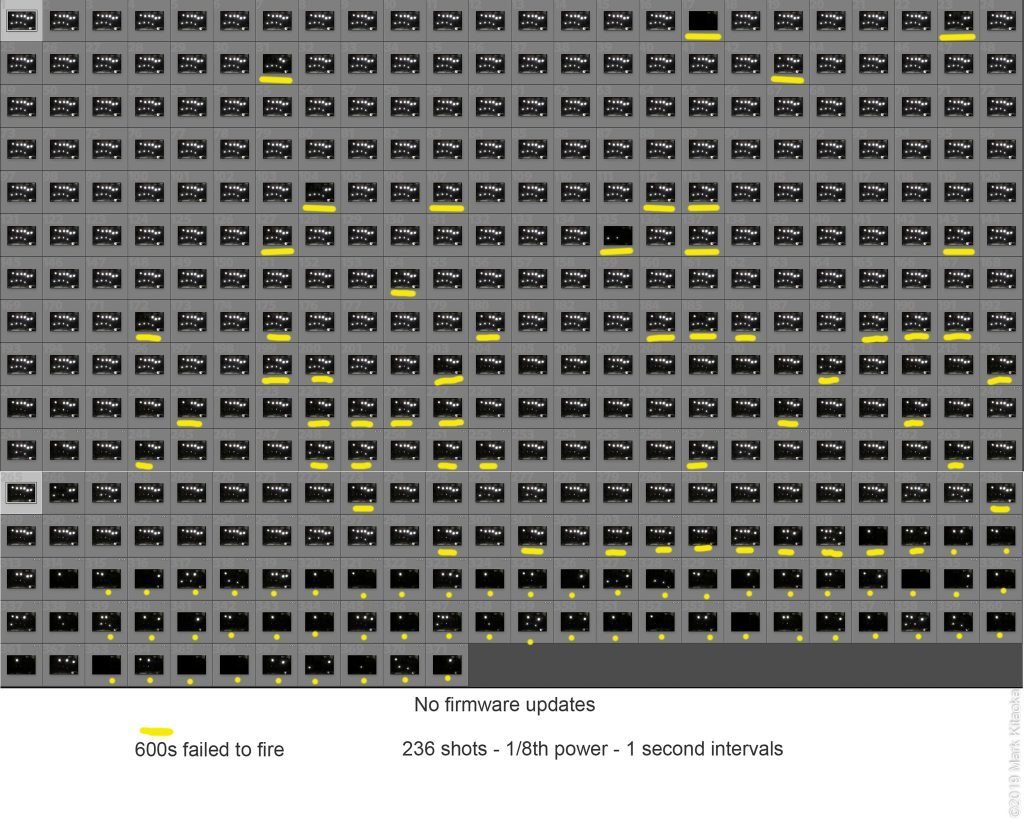 At a higher power setting more misfires occurred. And as the strobes began to heat, I had many more misfires. 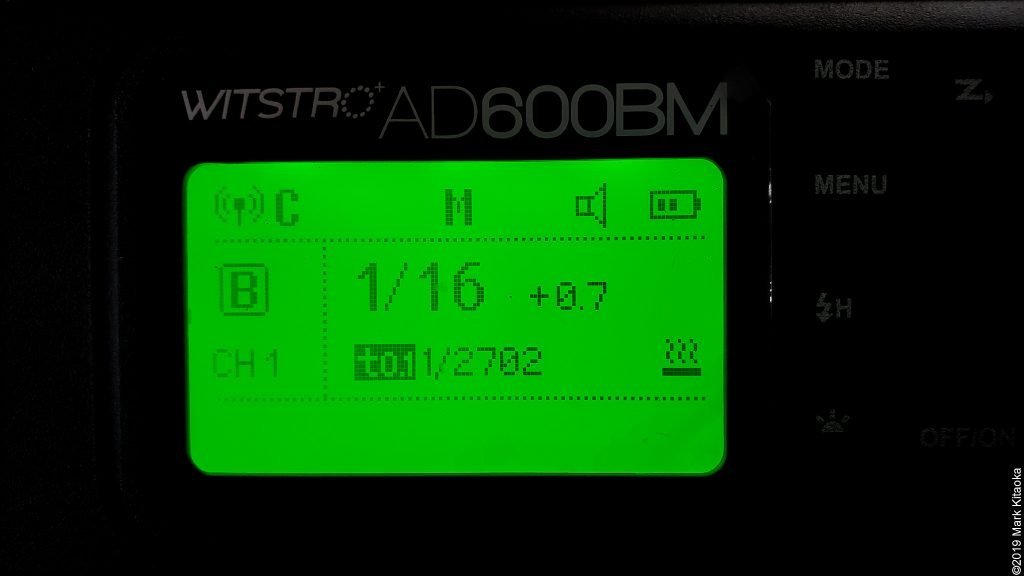 At the end of the first test, all strobes showed the heat indicator warning icon.

Next I decided to nix the 200s since I have never had a misfire with them even before updating the firmware on the triggers or the strobes…interesting. So for this test I just did a 1/16th power level. When I have time or more importantly after I use my gear on actual shoots I will report back on any improvement in misfires. But at this level I’m really please with the results. 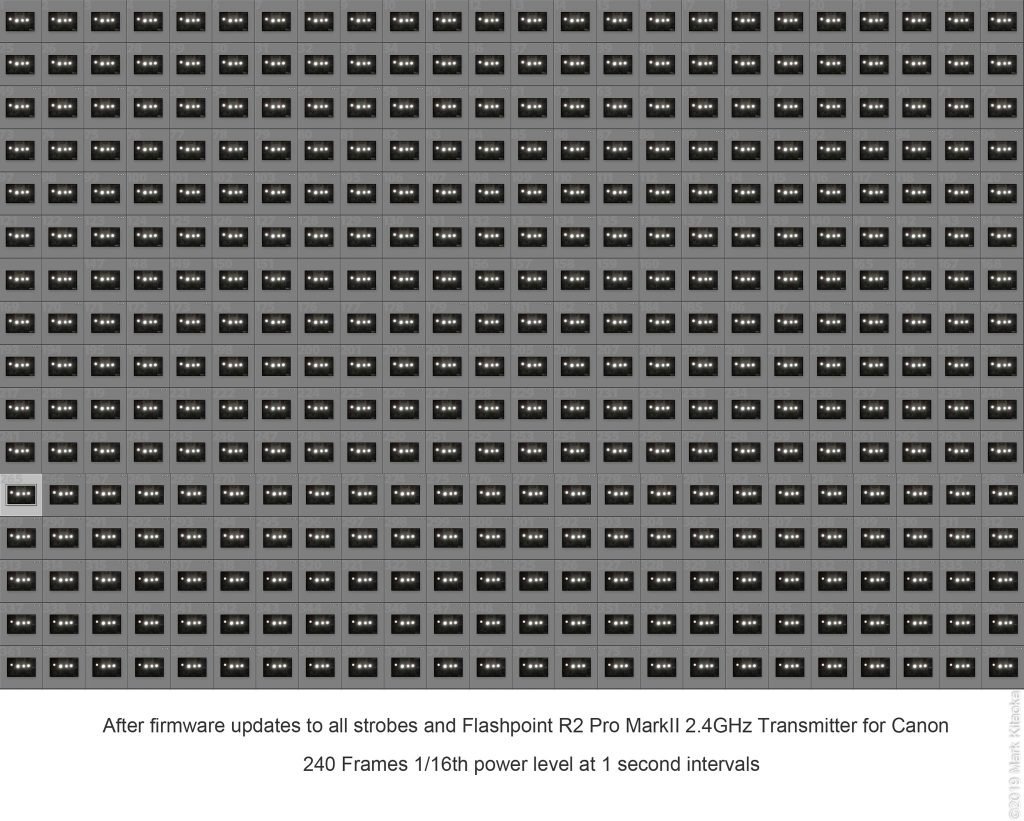 I’m concerned that Flashpoint has not released a newer firmware version for Pentax. Since that is the camera I primarily use for client publicity sessions I’m hoping that f/w version is forthcoming. I’m currently running 1.0 which is the only one available at this time. 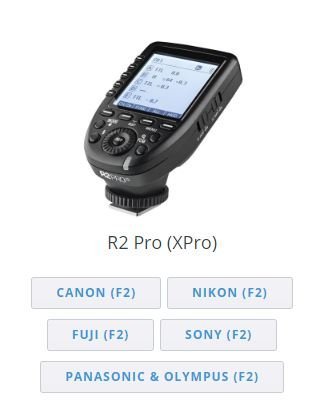 As you can see, no f/w update is available for Pentax. 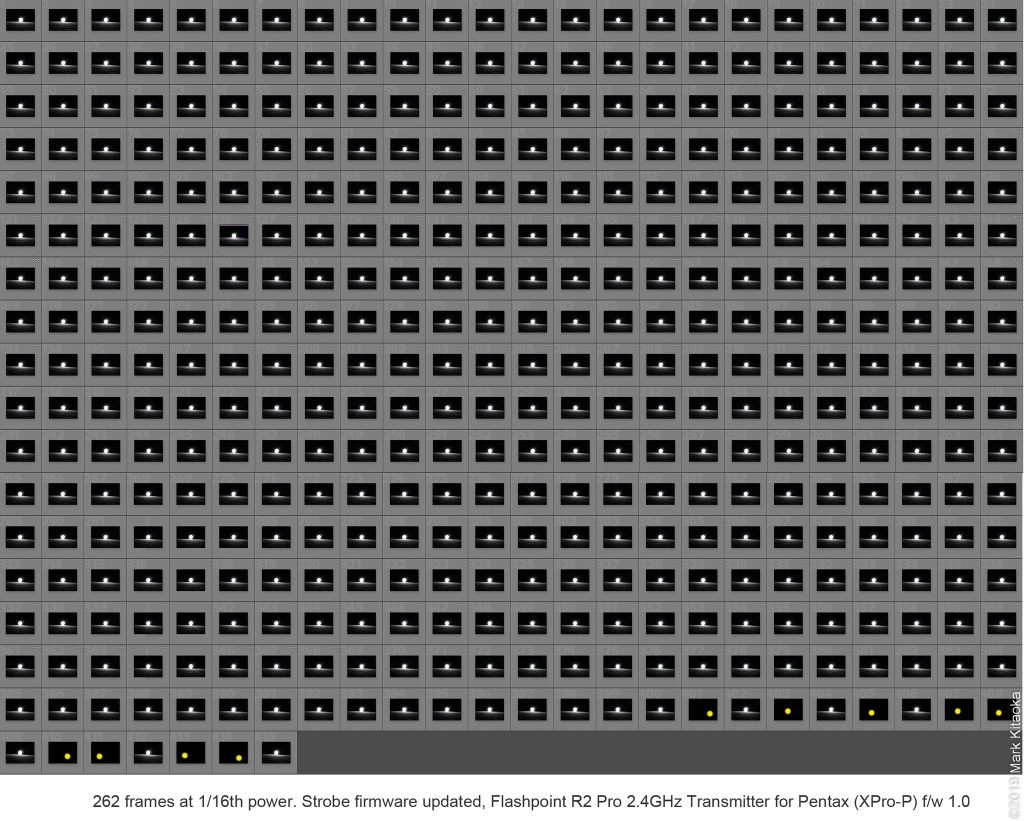 I’m really quite pleased of the lack of misfires for my Pentax. It only started to misfire as the strobe heated.

Although I don’t fire my camera for 200 frames at one second intervals I am a bit concerned that as the strobes heat misfires will occur. Anyway after using my strobes on actual upcoming client work I will report back here on any improvements in misfires.