I recently used this unit during a session with a Fresnel. It can be found here.

I recently tested the Flashpoint xPLOR600 Pro on location using my gobo device for an upcoming session. Because of the Pro’s excellent modeling light I was able to see exactly where the pattern falls even in bright daylight. Plus the LED modeling light does not generate enough heat to affect the plastic Fresnel lenses in the unit. 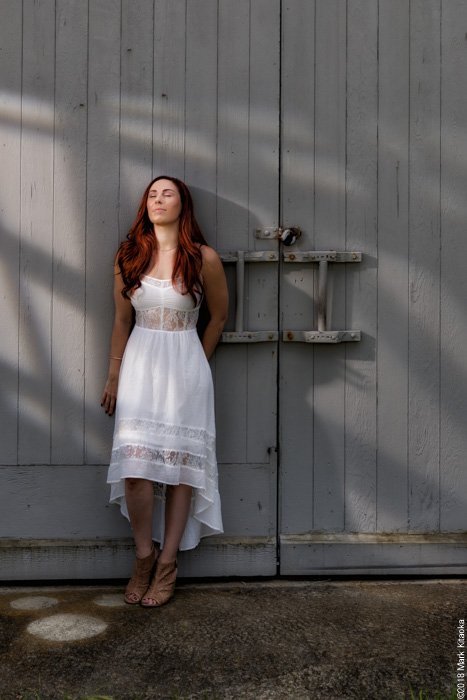 Light pattern was created with a Rosco gobo titled “Construction.”

I decided to update this post even though the two gobo modifiers I use are sadly no longer available. The first unit I’m talking about is the SP Image Projector. It uses Rosco size B metal gobos. When it was available it was very inexpensive as well as very effective. I’m updating this post to say that I’ve adapted it to accept any Bowens strobe since I’ve switched from PCB Einsteins to Godox/xPLOR600 units. I also needed to have the ability to rotate the gobo holder so that I can angle the unit to suit my needs. When I was using the PCB strobes Paul’s mounting system allowed me to rotate the unit when attached to an Einstein. Not so with a Bowens mount so I simply used an older Bowens speed ring which allows me to rotate the SP Image Projector. 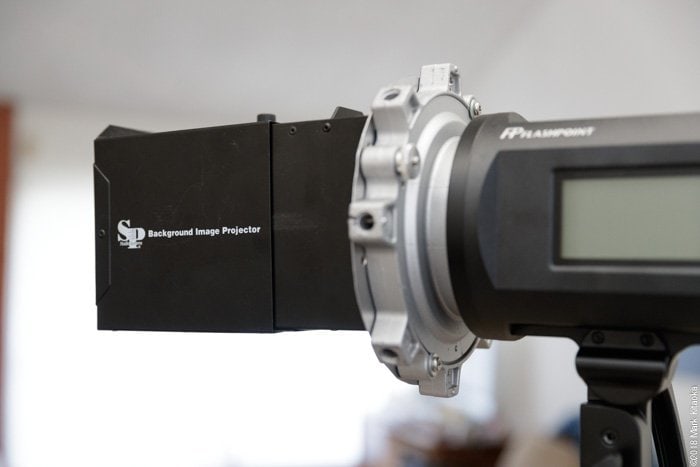 My DIY mount to allow the use of Bowens strobe units. The thumbscrew allows me to rotate the gobo unit. 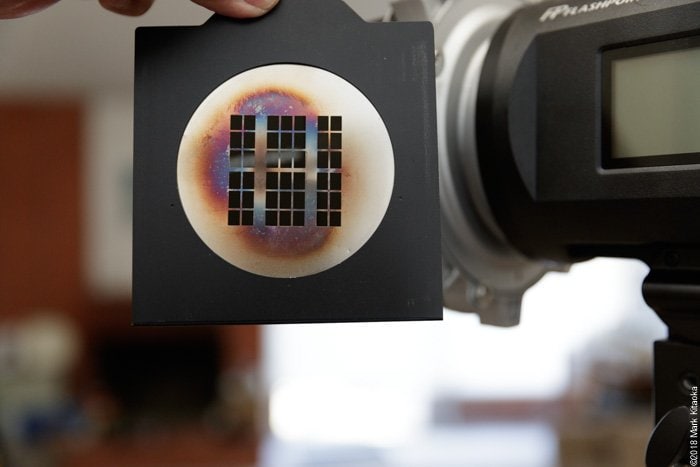 Rosco Size B window gobo. The heat from a theatrical follow spot caused the discoloration. I bought my gobos used. 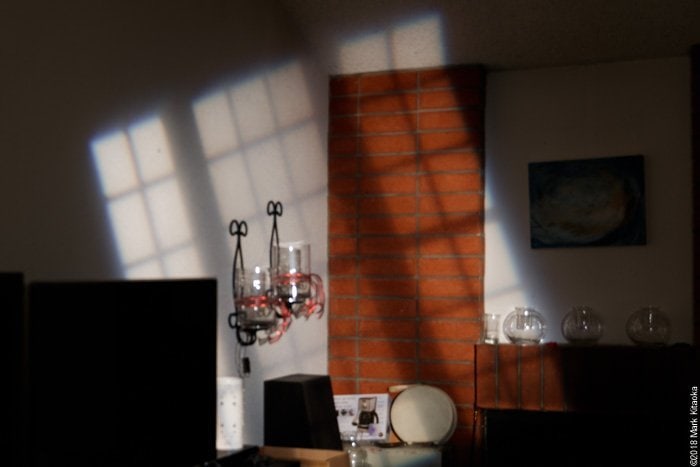 I can rotate the SP unit at will to suit the mood or scene. 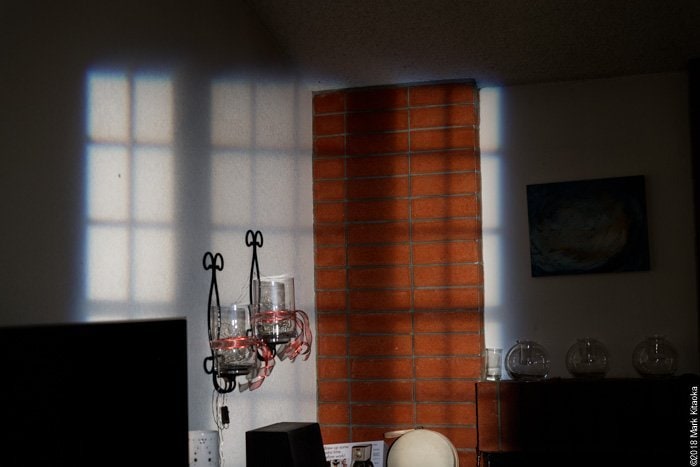 Keeping the gobo level in this test shot. 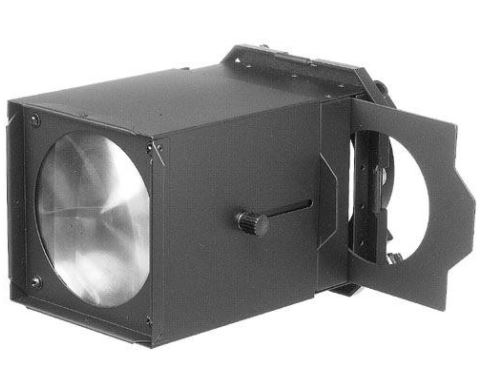 The SP Image Projector which sadly is no longer available. 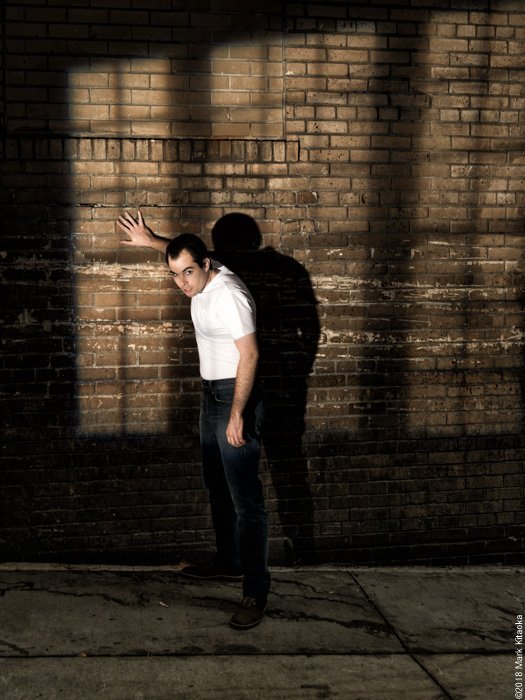 I have used the SP Image Projector along with an appropriate gobo in many a commercial shoot. This was to portray Lee Harvey Oswald in the play “Assassins” 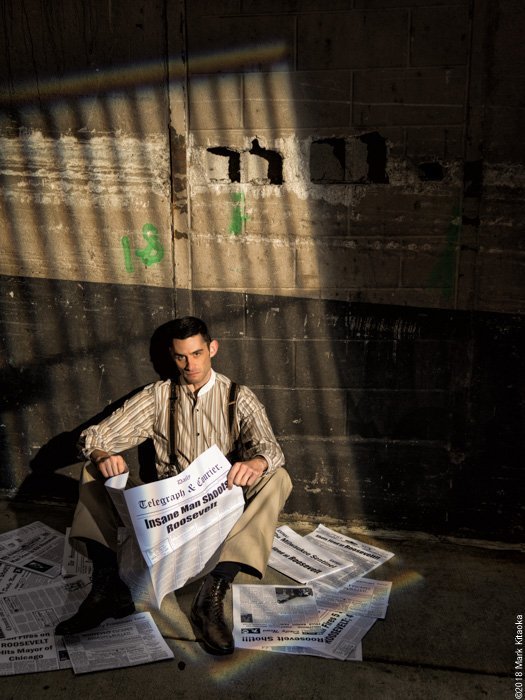 I used the SP Image Projector along with a jailhouse door gobo in a commercial shoot. This was to portray a convicted felon in prison in the play “Assassins” 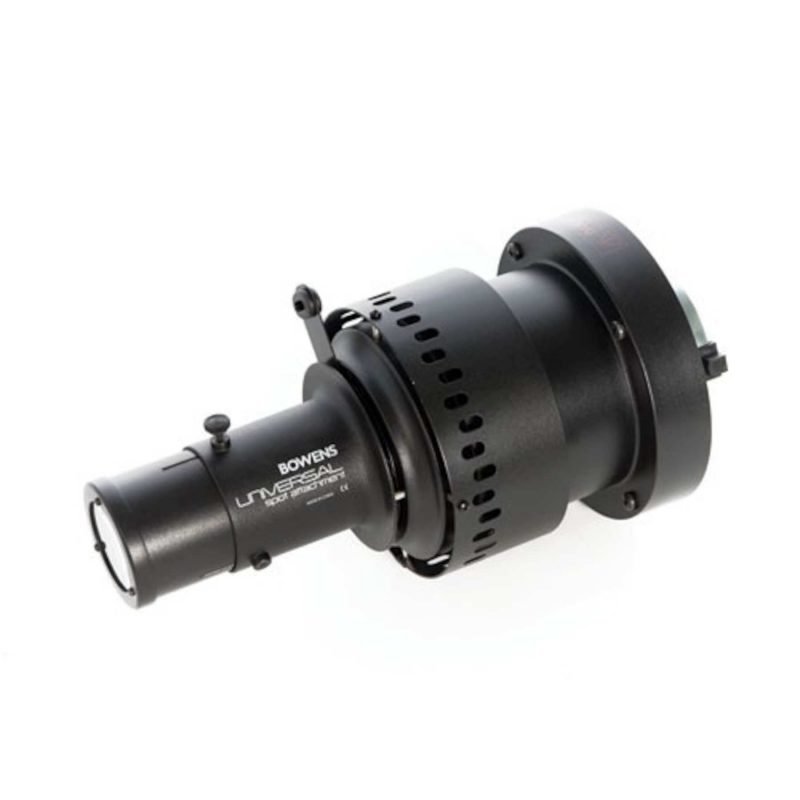 The Bowens Universal Spot Attachment is yet another gobo strobe modifier that is no longer available. It uses the smaller Rosco M size gobos. What was so nice about this unit is that there is no fabricating to use it on a Bowens mount strobe. 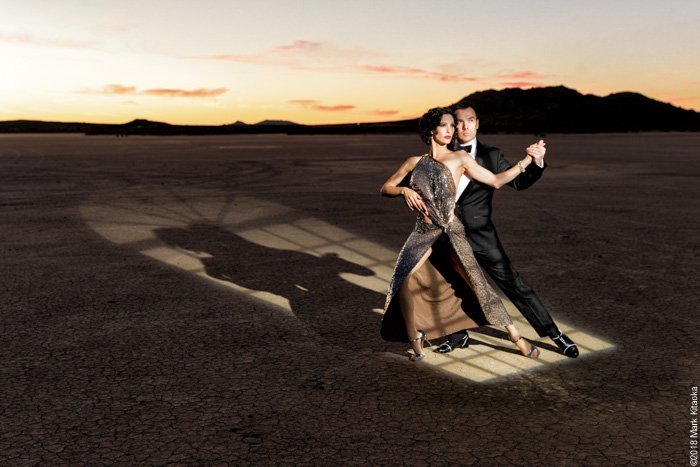 For my project “Tango in the Mohave” I used the Bowens Spot Attachment with a cathedral window gobo paired with the Flashpoint Portable 1200ws Extension Head. Remarkable combination. Funny back story, when Eva, the dancer in this photo saw it on my iPad during the session she asked “Mark, where is the window? I didn’t see it when you were taking this photo.” LOL so cute!!!

Apparently both of these gobo modifiers were not popular enough for each manufacturer to continue producing them. Sad. I know that there are companies who make gobo projectors for speedlights so all is not lost if you want to use one. Before I found any of these unit I converted a Leko 1000w tungsten theatrical follow spot into a strobe gobo modifier. I wrote a post about this crazy idea and will be converting it to accept a Bowens mount. Yeah it’s damn heavy, but produces the best light to date for gobo use paired with my 1200ws head. Just kinda impossible to take on an airplane! LOL! 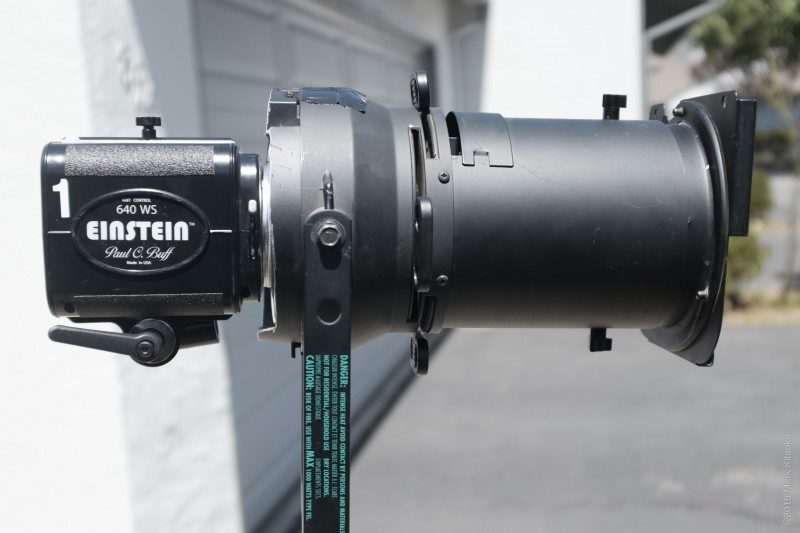 Yeah it’s crazy as shit, but when you’re motivated and you want something, well…. 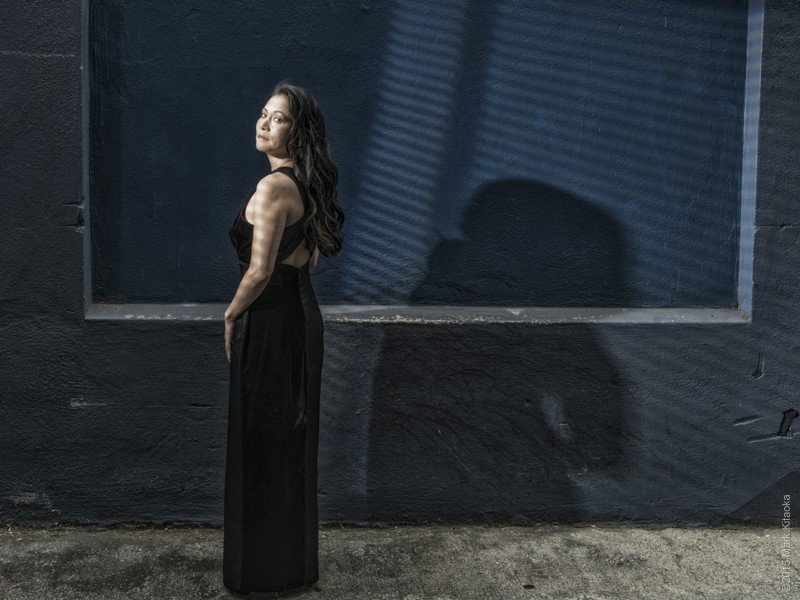 One of the great advantages of having a portable gobo/strobe combination is the ability to use patterns of light outside of a studio environment. Recently I wanted to create the illusion of a window on a painted concrete wall located in a parking structure. I loved the texture the wall provided so I simply took my gobo device, one Einstein strobe hooked to a Vagabond Mini Lithium battery. An incredible little combination for on location light pattern needs.

For years I have hauled around a full size stage follow spot just so I could use gobos in special photo shoot sessions. For anyone who knows me I seldom complain, it’s just how I was raised. But I will say that on a CONSISTENT basis my primary bitch is lugging gear. I hate it, I literally hate lifting, hauling and dragging gear to and from the airport, onto the car rental shuttle, into the rental counter, into the car, into the hotel, back out of the hotel into the car and then into the client’s venue. And then all of that in reverse. Get the picture? Assistants? Sure, but not on every assignment…. 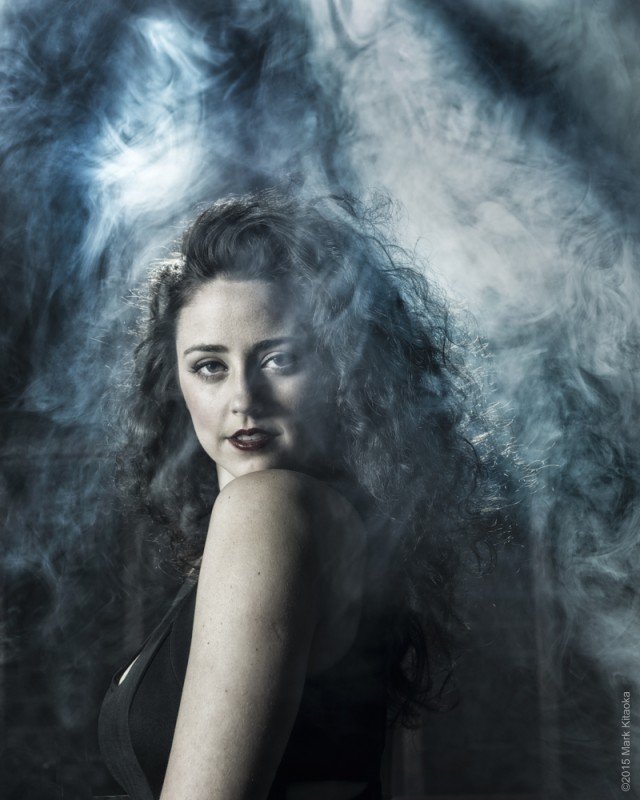 My SP unit with a multi circle Rosco B gobo as an accent light shot with an Einstein strobe with haze in the air. Key light is an Einstein camera left shot through a PCB Extreme silver PLM.

Yet what overrides my bitching is my love for light. I’m crappy or let me be more accurate, I’m absolutely shitty at Photoshop. So I try my very best to do what I want in camera. I work with a remarkably talented graphic artist and he’s often on set with me when I shoot. He can turn my shots into magic with graphic treatments that rival movie posters. But for me there’s a pride in doing most if not all of my vision in camera. Ego, yes it’s ego…

One of several issues using a theatrical follow spot is even at 1000 Watts, the light is easily overpowered when I combine the follow spot with a strobe. Sure I can reduce my aperture, but there are times when I need a large DOF so shooting at f2.8 just won’t cut it. For those that don’t know the difference between watt seconds and constant light watts, educate yourself. There’s plenty of information online and I’m not going to go into that here. I also tend to use the follow spot high, so that means a solid C stand and the effort of hoisting the 20 pound follow spot into the air. I consider that lugging too… 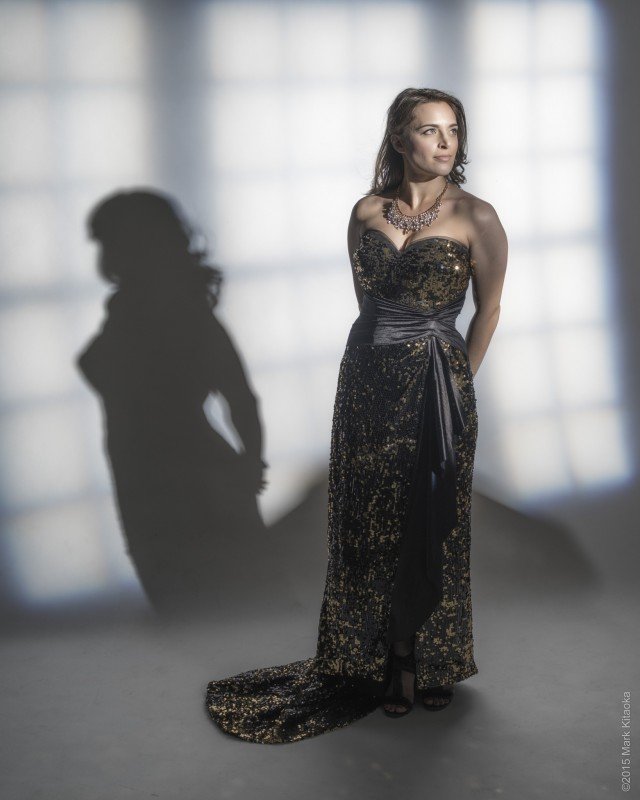 SP unit and Einstein with a Rosco window gobo.

The other issue is trying to ship a 20 pound follow spotlight to a client’s location. It’s heavy, it’s cumbersome, it’s fragile and I really don’t need to charge the client the extra weight/baggage for something they often can do ‘in Photoshop.’ So my gobo use had been relegated to only local clients. 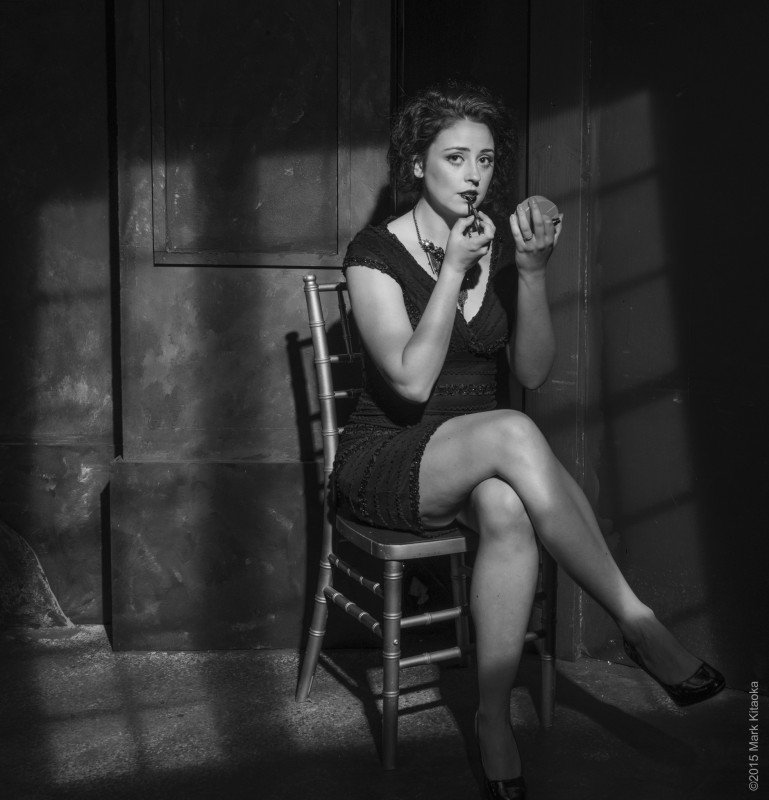 SP unit with an Einstein using a Rosco window gobo.

I had recently seen a post by Zack Arias about using gobos with speedlights using the Lastolite Strobo Gobo. A very cool device for those who like to use speed lights. I do not. So I searched and found the item he uses at B&H Photo, one of my favorite wallet depleting online shops. But as I was looking at the unit one of their sub categories showed an item called the SP Studio Systems Background Image Projector. 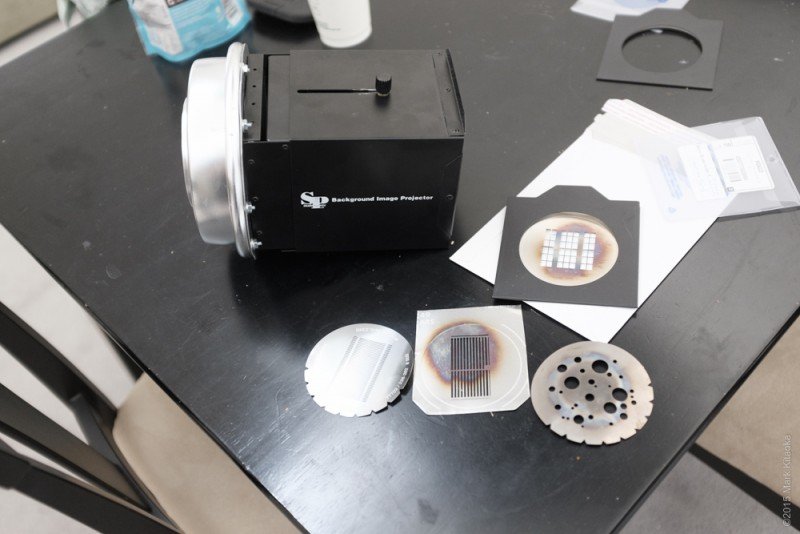 My final configuration. The unit uses Rosco B sized gobos.

One of the individuals who purchased the unit had adapted it for PCB strobes! So for $39.95 I figured I could take a chance on the possibility of using a Fresnel/gobo with my Einsteins and have the ability to take it on the road. I also ordered the LiteMod system he used from PCB. Once everything arrived I fabricated a plate to adapt the SP Studio unit to the LiteMod system. But what I found was the combination worked, but was both too heavy and cumbersome for my taste. So I sent the LiteMod system back to PCB (I love their customer service!) and fabricated my own contraption.

Using one of PCB’s umbrella reflectors, I fabricated an aluminum plate to hold the SP to the reflector. I also configured the unit to use the umbrella hole at the top to dissipate heat. 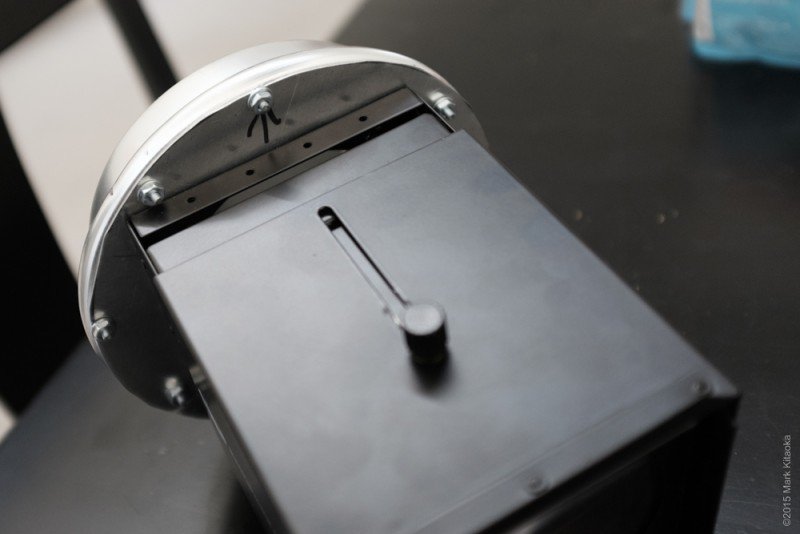 My fabricated plate which holds the SP unit to the PCB Umbrella reflector. 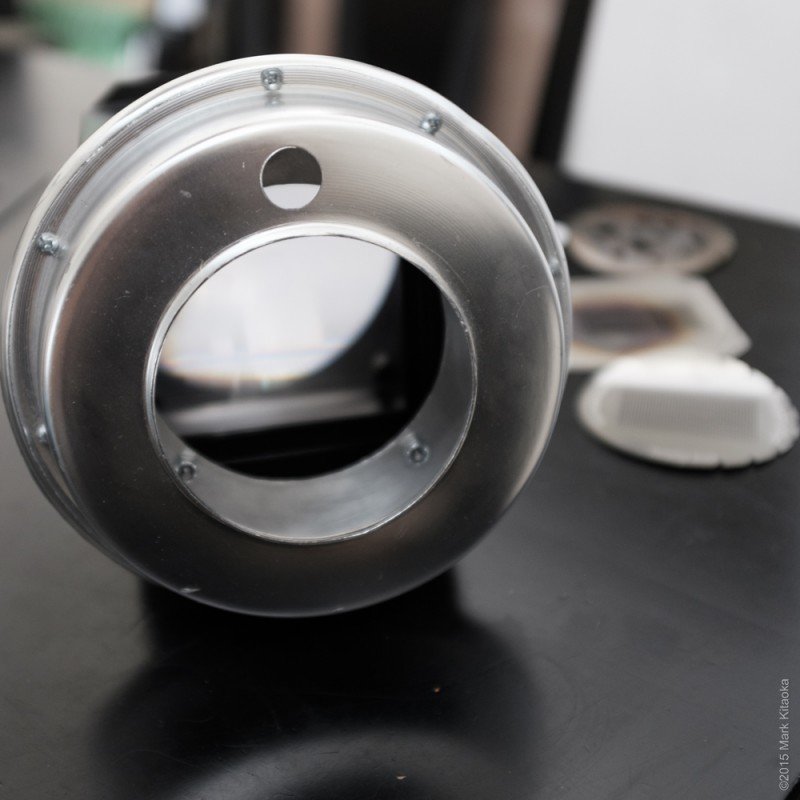 PCB’s umbrella reflector with umbrella hole at top to help with any heat.

One thing I did notice is the range of adjustment on the SP unit is not enough to ensure the image of the gobo was sharp at anything beyond 10 feet. So I extended the groove on the top of the SP unit to allow the focusing slide to have gobo images sharp up to 30 feet. Be forewarned, this involves disassembling the Fresnel lens configuration. There are three lenses in the unit with spacers that are of differing lengths. Pay close attention to how it comes apart and in what order. 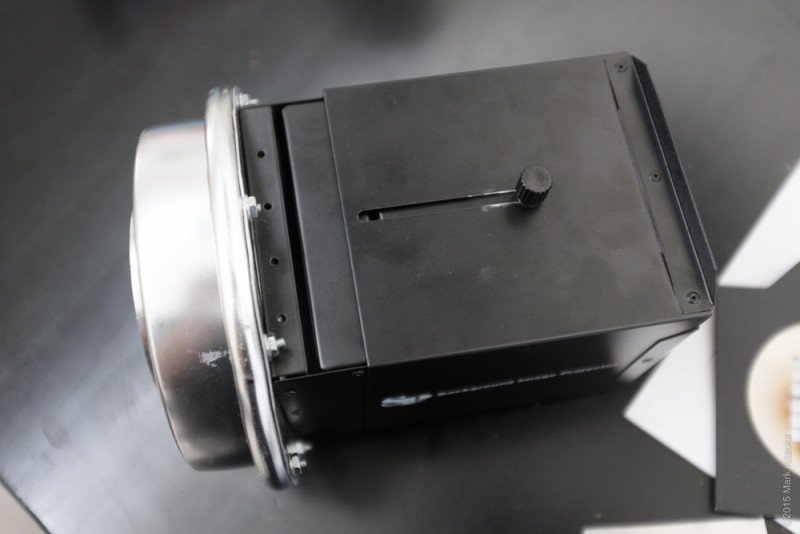 Increased the range of adjustment on the slide to accommodate distances beyond 10 feet.

The thing works like charm and weighs next to nothing. I have now used it on two commercial shoots and could not be happier. Because I’m using it with Einsteins I am able to use other strobe/modifier combinations without worry that my gobo light will be overpowered by my key lights.

One thing to note, I do NOT use my modeling light with this unit. Since the Fresnel lenses are plastic and are relatively close to the modeling/strobe lights I don’t want to risk having them melt. It’s a small thing and aiming your strobe/SP unit is easy. A few test shots will tell you if you’re on target. If you have trouble focusing I use a secondary Einstein pointed at the talent with the modeling light at 100%, but the strobe power at 2.5ws. It works like a champ for focusing without affecting your final shot.

Is it worth it? Well of course…it means less lugging!