I was recently hired to create some publicity imagery for the stage performance of “Anything Goes.” Since the location of that play takes place in the 1930s aboard a luxury vessel the client wanted the mood to reflect that time and space. So we chose a local theatre’s upper balcony to shoot some of the scenes along with the doors leading into the lobby. The windows are round like portholes so they’d give the correct mood and story to the shots. 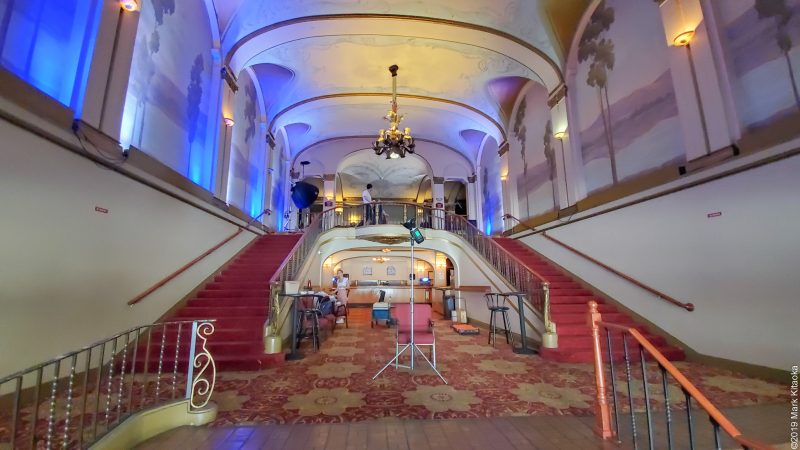 The interior of the theatre as it is normally lit. You can see the strobe pointing up I used to illuminate the ceiling for my shot in the upper balcony area. 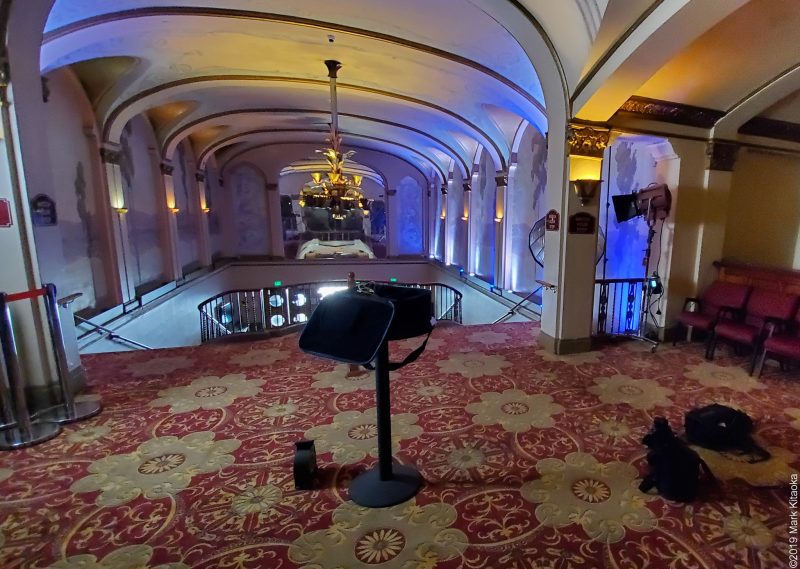 Upper balcony area where we found the best mood feeling.

Both my client and I wanted an old school Hollywood glamour look to the images and using a large Fresnel would produce just that sort of light. I chose to use my Mole Richardson 10” Fresnel spotlight I have converted into a strobe as the key light for the indoor shots. 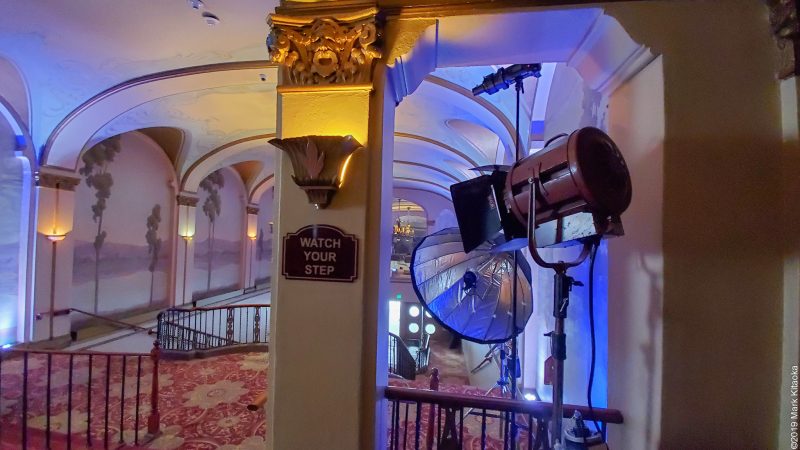 Mole Richardson 412 with barndoors is my keylight. Above it is the Bowens gobo projector. Just below is my CononMark 120cm used as my focusing fill light. 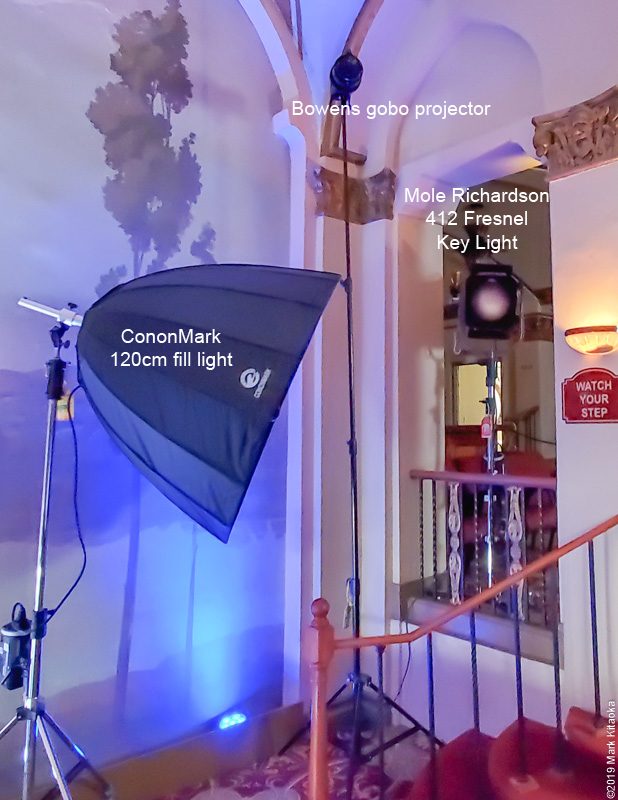 The upper balcony of the theatre’s lobby does not have any windows, so I used my Bowens Universal Spot Attachment for Gobos to give the illusion of a grand framed window on the wall. I used my CononMark 120 as the fill light since a focusing rod modifier can be subtlety focused to highlight the area I want filled. 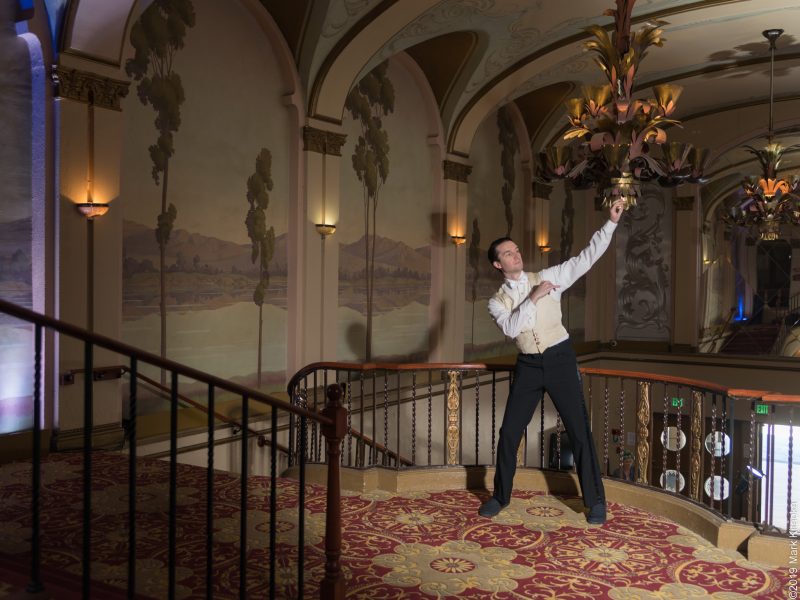 In this light test show you can see no ‘window’ appears. 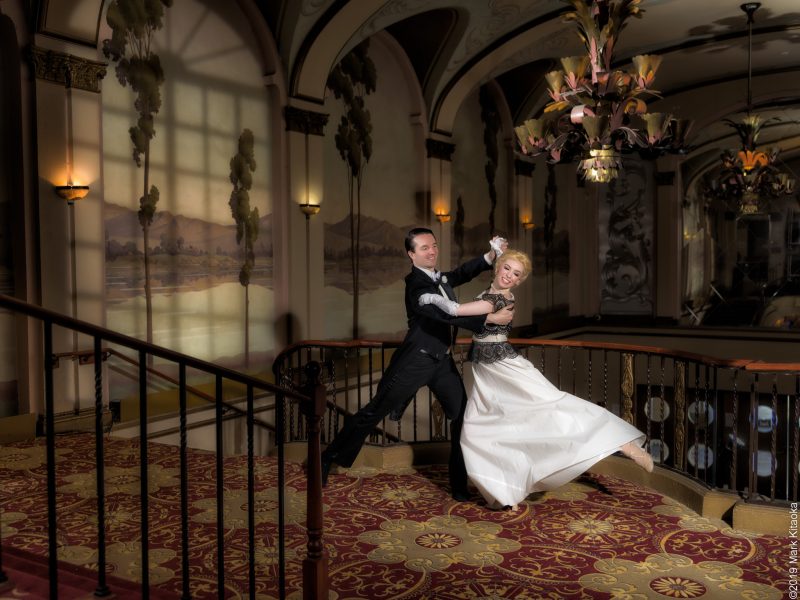 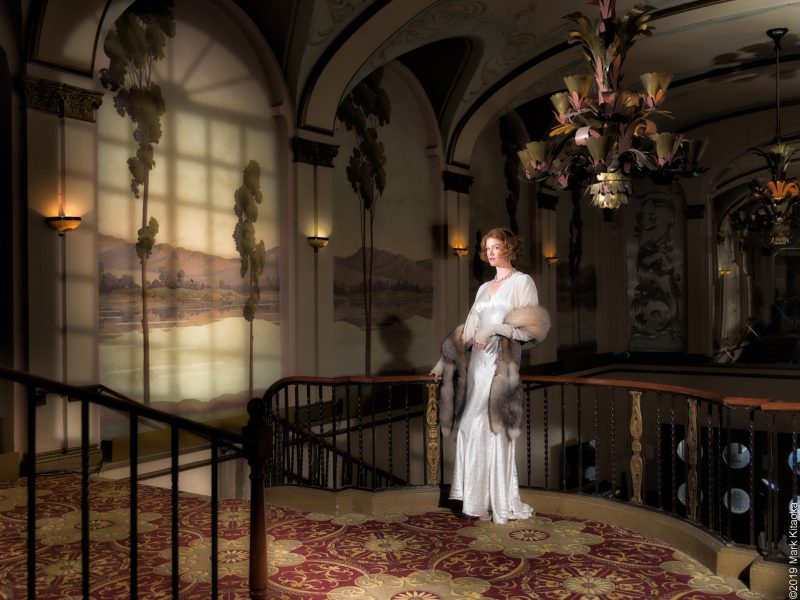 Two of the final upstairs shots.

On the walls of the theatre balcony are very elegant sconces and I did NOT want to overpower their illumination with my strobes, so using barn doors on the Mole Richardson Fresnel was necessary to prevent spill. I also used a 20 degree gridded Aputure Fresnel to illuminate the chandelier closest to the talent and finally an 8” coned strobe on the lower level to illuminate the ceiling. All strobes are Flashpoint 600s. Once those shots were created and the client was pleased after viewing them in real time on my iPad we moved to the outdoor area with the circular windows in the doors. 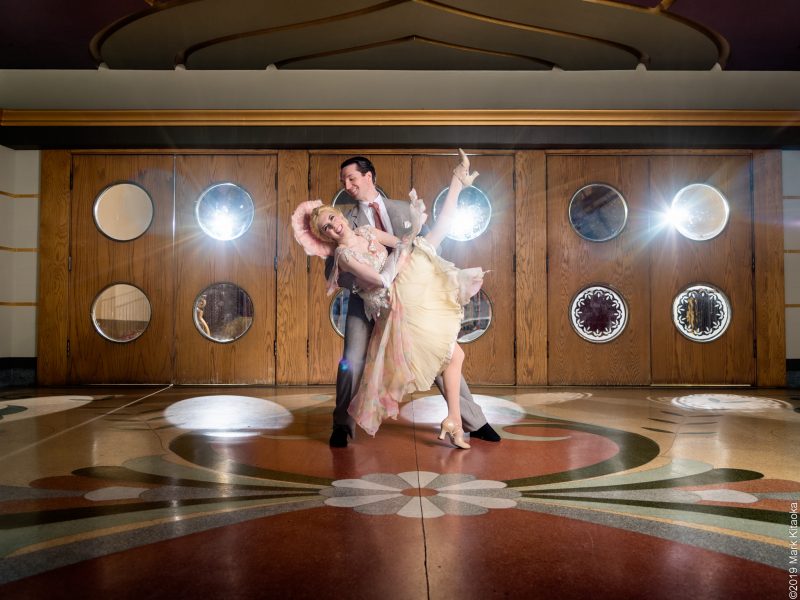 I chose to use three bare bulbs to throw light out through the windows toward my lens to create a very Hollywood look and feel to the images. The tiled patterned floor of the entry way is old school in an elegant style from the era we were trying to replicate.

In this instance my key light was my Glow EZ Lock Deep Parabolic Quick Softbox (48″). I only used the inner disk and baffle as diffusion. I find that for my work and client’s taste that configuration works best 80% of the time. In my personal view that modifier is a wickedly good value and produces excellent quality of light. And man is it ever easy to setup and strike! A little tip, I carry a short piece of ½ PVC in the bag about two feet long. I simply place it over the shaft of the octa and push down until the thing locks in place. SO convenient, no trying to maneuver myself as I am trying to push the dang center shaft locking collar down. BOOM, done! LOL

The client hired my partner to create a promotional film of the show and some of the processes I’ve described above are included. That film can be found here.

It really pleases me when my client is very happy with one of the executed concepts!